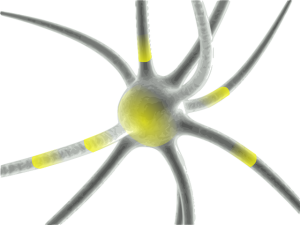 March is Multiple Sclerosis (MS) Awareness Month, so this WEEKLY takes a look at the science behind the disease and some of the treatments developed for it. MS typically occurs in susceptible individuals between the ages of 20 and 50, and there are an estimated 2.3 million cases worldwide according to the MS Society. Famous faces suffering from multiple sclerosis (MS) include former talk show host Montel Williams and Sopranos star Jamie-Lynn Sigler.

Both a neurological disorder and autoimmune disease, MS originates as an immune-derived attack on the myelin sheath surrounding the axon portion of the neuron. With this insulating layer damaged, the electrical signal relied upon by neurons for communication loses the ability to push data forward. Initial symptoms vary due to the particular part of the nervous system affected. Neurons all along the front lines of communication are under threat, so symptoms can include motor, sensory, or visual problems.

About 85 percent of MS cases are relapsing-remitting (RRMS), meaning periods of recovery followed by remission are seen between clearly-defined periods of new or increasing neurologic symptoms. Those afflicted with RRMS usually transition into secondary progressive MS, experiencing an accumulation of disability over time. Primary progressive MS, in contrast, exhibits a worsening of neurologic function from the onset of symptoms. In both cases, significant loss in mobility continues as neurons lose their ability to send data.

The identification of susceptibility genes, or genes that increase the odds of developing a disease, have contributed to the framework for understanding MS. The direct cause, however, is largely unknown.

What we do know:

The ultimate expression of the disease is likely the result of a combination of genetic and environmental factors. (Article continues below)

Do you struggle to understand the basic science that your employer or clients are developing? Our 2-day BioBasics: Biotech for the Non-Scientist course in May will give you the science knowledge to hold your own in biopharma.
Register today!
May 8-9 in New York City
Can’t make the face-to-face course? Check out our Biology of Biotech online course
Biology of Biotech Online Learning

Although there is no cure for MS, there are a number of drugs on the market that can slow its progression. Most work by blunting the immune system’s attack on the central nervous system (CNS). MS sufferers switch between different drugs as the course of their disease worsens.

One of the most common first-line treatments for RRMS is recombinant interferon-beta: Avonex and Plegridy by Biogen (Cambridge, MA), Rebif  by EMD/Serono (Darmstadt, Germany) and Pfizer (New York, NY), Extavia by Novartis (Basel Switzerland), and Betaseron by Bayer (Leverkusen, Germany). Interferon-beta is a signaling molecule that reduces the overall levels of inflammatory agents in the brain. Patients on interferon-beta therapy experience an increase in the integrity of their BBB, resulting in fewer myelin sheath attacking WBCs entering the brain. Recent studies suggest interferon-beta may increase the production of nerve growth factor, improving neuronal survival.

Copaxone, marketed by Sandoz (Holzkirchen, Upper Bavaria, Germany), consists of four amino acids—glutamate, lysine, alanine, tyrosine—that constitute a large percentage of the myelin protein, which make up the myelin sheath. This injectable is thought to act as a decoy of sorts to the immune system—white blood cells that would normally attack the myelin sheath attack Copaxone instead.

Three monoclonal antibodies are available to treat MS. Sanofi’s (Paris, France) Lemtrada binds to a protein on the surface of T-cells, one type of WBC thought to be a key player in attacking the myelin sheath. A Lemtrada-bound T-cell is targeted for destruction by other WBCs, thereby reducing the number of T-cells available to destroy the myelin sheath. Biogen’s (Cambridge, MA) Tysabri helps to prevent T-cells from entering the brain by binding to proteins called VCAM1 on the surface of the blood vessels making up the BBB. In order for myelin-attacking T-cells to cross the BBB, they must attach to these VCAM1 proteins and “pull” themselves through. With Tysabri in place, the T-cells cannot attach to the VCAM1 proteins, and are denied entry into the brain. Finally, Ocrevus, developed by Roche (Basel, Switzerland), was the first, and so far only, therapy approved for the primary progressive form of MS in 2017.  Ocrevus targets B-cells for destruction. Previously, B-cells were not thought to play a role in MS pathology, but the apparent clinical efficacy of Ocrelizumab suggests they might.

Until 2010, injectable drugs (listed above) were the only option. With the approval of Novartis’ Gilenya, MS medication in pill form arrived. Gilenya works by binding to a receptor on the surface of T-cells that prevents them from leaving the lymph nodes. Thus, they are unable to enter the brain to weaken the myelin sheath.

In 2013, much excitement surrounded the approval of Biogen’s oral MS medicine, Tecfidera. Clinical trials suggested it was at least as effective and had a better safety profile than other MS drugs. While the exact mechanism of action for Tecfidera is not known, it has anti-inflammatory properties and activates the expression of antioxidant proteins, which may explain its neuroprotective effects.

MS drug discovery and development is very active. Here are just a few of the highlights:

MS remains a challenging disease to manage. Continued focus on understanding the disease and developing additional therapies will help millions of patients.