A Bone To Pick With Osteoporosis 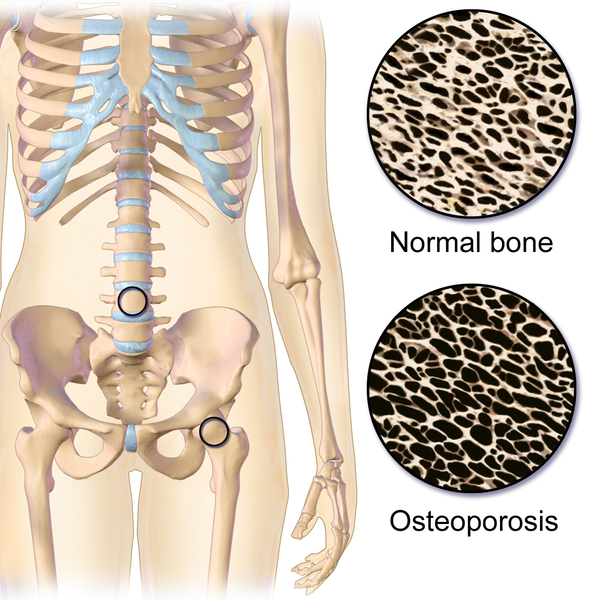 Osteoporosis is the loss of bone density which causes bones to become weak, brittle, and easily broken. In healthy people, bone is constantly being broken down and replaced. When bone is broken down more quickly than it is replaced, osteoporosis occurs. As the disease progresses, patients become more vulnerable to broken bones, especially in the hip, spine, and wrist. In advanced cases, even minor falls or bumps can result in a fracture, leading to loss of mobility.

According to the National Osteoporosis Foundation, osteoporosis-related fractures number as many as two million per year in the US, with related costs at $19 billion. These numbers are expected to climb to three million and $25.3 billion, respectively, by 2025. In this WEEKLY, we’ll break down how bone loss occurs, and explain how  osteoporosis drugs fight this loss.

Bone formation and maintenance is a complex process that relies on many different interacting factors but is driven by two specific cell types: osteoblasts, which lay down bone tissue, and osteoclasts, which degrade bone tissue. This process may be activated when bone remodeling is required, such as in response to a fracture. Osteoclasts break down the damaged bone tissue by secreting an acidic substance in a process known as bone resorption, and then osteoblasts produce new tissue for bone formation. During childhood, formation exceeds resorption; as people age, resorption begins to exceed formation.

Other factors that influence bone formation and maintenance include calcium, vitamin D, the hormone estrogen, and weight-bearing exercise. Calcium is the mineral that provides bone with its hardness and strength. Because calcium plays a role in other critical metabolic processes like muscle contraction, diets inadequate in calcium may trigger the activation of bone resorption in order to release supplies of this vital mineral into the bloodstream. Making sure that we absorb the mineral from the food we eat is necessary to keep up with demand, and vitamin D is essential to the calcium absorption process.

Weight-bearing exercise such as walking, jogging, or weight-lifting help to build and maintain bone mass. When stress is put on bones from weight-bearing exercise, they respond by activating osteoblasts to better withstand the stress which ultimately increases bone density.

It’s long been known that estrogen protects women from bone loss. In the past decade, researchers at the University of Buffalo pinpointed the reason why: estrogen protects osteoblasts by inhibiting an enzyme that would normally trigger apoptosis—programmed cell death—in the osteoblast cells. This is why post-menopausal woman have the highest rates of osteoporosis. (Article continues below)

Explore the regulatory, commercial, and scientific factors that propel a drug successfully into the market.

The most common treatment for osteoporosis today is bisphosphonate, with the most widely prescribed brand being Fosamax (Merck; Kenilworth, NJ). Bisphosphonate drugs activate apoptosis (cell suicide) in osteoclasts. By reducing the number of osteoclasts, the rate of bone decrease is slowed. These drugs have been clinically shown to decrease fractures of the wrist, spine, and hip of at-risk postmenopausal women. These bone-preserving drugs may have some unpleasant gastrointestinal side effects, however, and their long-term use is associated with the development of low-impact femoral fractures. In the past few years, several good alternatives to bisphosphonate have entered the market.

The Holy Grail of osteoporosis drug discovery is to find drugs that will not only stop bone loss, but actually build new bone. Thousand Oaks, CA-based Amgen’s Evenity does just that by inhibiting a protein called sclerostin. Sclerotin hampers bone formation by osteoblasts. By suppressing the inhibitor, the drug makes bone-producing osteoblasts more active. A second company, OsteoGeneX (Kansas City, KS), has a small molecule inhibitor of sclerostin in preclinical development.

Other bone-building drugs on the market include Forteo (Eli Lilly, Indianapolis, IN) and Tymlos (Radius Health, Waltham, MA). Forteo is a recombinant version of the parathyroid hormone (PTH). While chronically high levels of parathyroid hormone activate osteoclasts, a once-daily injection of PTH activates osteoblasts more than osteoclasts, thereby increasing bone growth. Tymlos is a peptide analog of human parathyroid-related protein. It is a naturally occurring peptide hormone that has a similar effect as parathyroid hormone. In Phase III clinical trials, Tymlos was as effective at preventing vertebral fractures as Forteo, and more effective at preventing other types of fractures.

Amgen has another osteoporosis drug, Prolia, on the market. Prolia is a monoclonal antibody that works by binding to RANKL, a protein that binds to and activates RANK. RANK is a receptor present on the surface of osteoclast precursor cells. When RANK is activated, these osteoclast precursors go on to form more osteoclasts. By binding to RANKL, Prolia prevents it from activating RANK, stopping the formation of new bone-busting osteoclasts. Natural levels of RANKL are thought to increase in post-menopausal women, the group at highest risk for osteoporosis.

As the population ages, osteoporosis will become an even more prevalent problem. These new bone-strengthening drugs provide hope for good health and mobility for at-risk older adults.

During the development of both Evenity and Prolia, Amgen conducted research on the International Space Station to measure the effects of the drugs on mouse bone development in a microgravity environment, which is known to have a severe negative impact on bone building.