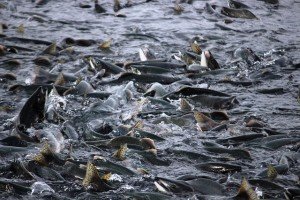 AquaBounty’s genetically modified salmon will make it to your dinner table in less time than it took to toil through the FDA pipeline. Coined AquAdvantage Salmon, it is the first genetically modified animal available for human consumption thanks to an approval last month. The two year wait time to grow the first batch pales in comparison to the 20 year application period undertaken by Massachusettes-based AquaBounty.

Public concerns contributed to the reasoning behind the lengthy and rigorous review time for the AquAdvantage Salmon application. To quell the safety concerns, the FDA and AquaBounty are releasing the entire data from the application to the public—something not routinely done for new food or drug applications due to confidentiality. So, let’s take a closer look at the science and piece through the numbers to find out exactly what’s on the menu for GMO salmon.

Wild salmon live mainly in the ocean, swimming up rivers to their freshwater birthplaces to spawn. Farmed salmon, or salmon aquaculture, use open cages in the ocean or self-contained systems to grow the fish, typically reaching maturity in about 30 months. AquAdvantage Salmon have been genetically engineered to reach market size in a fraction of the time—only 18 months!

How do the fish manage to grow so quickly? First, researchers took a growth hormone gene from a salt water relative—the Chinook salmon—and inserted it into the AquAdvantage Salmon. Next, they engineered the fish to produce the growth hormone year-round (instead of only in warmer months) by putting the gene under the control of a promoter, or a type of “on” switch. They borrowed the promoter from an eel known as the ocean pout, which enables it to survive the cold North Atlantic water by ensuring the continuous production of so-called “antifreeze proteins.” When transferred into AquAdvantage Salmon, the promoter signals the fish to produce growth hormone year-round.

Because of the faster growth cycle, the AquAdvantage fish require 25% less feed than conventionally farmed fish. This reduces both the environmental impact and the cost to the consumer when compared to other farmed fish, and eases the pressure on declining wild salmon populations from overfishing.

Increased allergen levels or introducing new allergens not seen in regular salmon are some of the biggest concerns of the GMO variety. The first evaluations for allergenicity tested the Chinook salmon growth hormone for similarities to known allergens, with none found. The FDA analysis of the data related to known salmon allergen levels was not significantly different from the levels of the allergens in non-GMO, farmed salmon. In fact, increased levels of vitamin B6—that did not exceed the recommended daily allowances—were the only significant differences between the two types of fish.

For both AquAdvantage Salmon and non-GMO control salmon, the levels of growth hormone were below the detection limit, and levels of estrogen and testosterone did not differ significantly.

The only potential cause for concern are the increased levels of insulin-like growth factor (IGF-1) in the GMO salmon, at 10.26 nanograms (ng)/gram vs. 7.34 in the control group. It is important, however, to put this number in perspective when compared to other animal products that we eat. These numbers are only slightly higher that the levels of IGF-1 found in organic milk. Beef from cows with no growth hormone treatments contain 275 ng IGF-1/ per ml of blood. The comparisons suggest consumption of normal amounts of AquAdvantage Salmon would not result in significantly higher levels of dietary IGF-1 than diets containing regular animal products.

It is also important to remember that dietary IGF-1 likely does not impact human health. First and foremost, all food proteins are broken down in the digestive track, meaning no individual would absorb an intact hormone from the foods they eat. And even if absorbed, the structure of salmon IGF-1 is different enough from that of human IGF-1 that it is very unlikely to interact with the human IGF-1 receptor and promote cell growth.

The other major public concern surrounding GMO salmon is the possibility of escape and interbreeding with wild salmon. Multiple redundant safeguards—biological, physical, and environmental—have been put in place to prevent the threat:

• Biological: The fish are sterilized, therefore unable to breed with wild salmon. Sterilization is accomplished by subjecting the eggs to pressure, which results in an extra copy of every chromosome, creating so-called triploid fish. This is a standard technique used for years to create sterile fish for fish farms.

• Physical: AquaBounty has taken significant steps to ensure the physical containment of the GMO salmon. The fish eggs are produced at a facility in Canada, and any eggs that pass through filters and into the drainage area will be killed by chlorine. The salmon themselves are grown in large land-based tanks in Panama, with multiple filters and nets installed to reduce the likelihood of escape to less than 1%.

• Environmental: In the very unlikely event that salmon eggs or salmon did escape production facilities, environmental containment measures would make it difficult for the fish to survive. For example, high salt concentration in water near the production facility would kill any escaped eggs while warm water temperatures near the Panama-based facility would be fatal to the salmon.

Even though retailers such as Whole Foods, Costco, Target and Safeway are refusing to stock AquAdvantage Salmon on their shelves, there is still plenty of time to examine the data before the first batch arrives in two years. Regardless of whether the next FDA approved genetically modified animal for human consumption is a pig or chicken, the time has come for the public to learn the science behind the headlines.