A Killer(-T) Nobel Prize In Medicine

On October 1, James Allison, now at the M.D. Anderson Cancer Center in Houston, and Tasuku Honjo, now at Kyoto University, won the 2018 Nobel Prize in Physiology or Medicine. The two scientists discovered the basis for today’s hugely successful immune checkpoint inhibitor therapies. Let’s look at their discoveries and how they have revolutionized cancer treatment.

Keeping The Immune System In Check

In the early 1990s, Allison and Honjo independently discovered two proteins that serve similar functions in our immune system. They both shut down killer T-cells, a type of white blood cell. We want our killer-Ts working hard to defend us against possible threats. But we also need to make sure they don’t attack our own healthy tissue. So, our immune systems need a mechanism that “checks” a dangerous over-activation of T-cells.

The medical community has long believed that the immune system plays an important role in eliminating cancerous cells as they emerge and before they develop into a significant problem. It does this by recognizing “tumor antigens” or proteins on the surface of overly-mutated cells that T-cells and other immune cells will react to as threats.

However, cancer cells begin their lives as normal cells. So they also display proteins that instruct the immune system to ignore them or, in other words, activate immune system checkpoints. Some tumor cells have actually evolved to make extra copies of these immune-suppressing proteins, making it almost impossible for T-cells to mount an attack.

In the mid-1990s, Dr. Allison hypothesized that inhibiting the CTLA-4 protein on T-cells would enable those T-cells to become more fully activated in their attacks on malignant cells. Allison then developed a monoclonal antibody to bind CTLA-4, blocking its ability to put the brakes on our immune system. Injecting the antibody into mice eradicated established tumors, providing the rationale for future checkpoint inhibitor therapies. Dr. Honjo performed similar work with the PD-1 checkpoint protein. 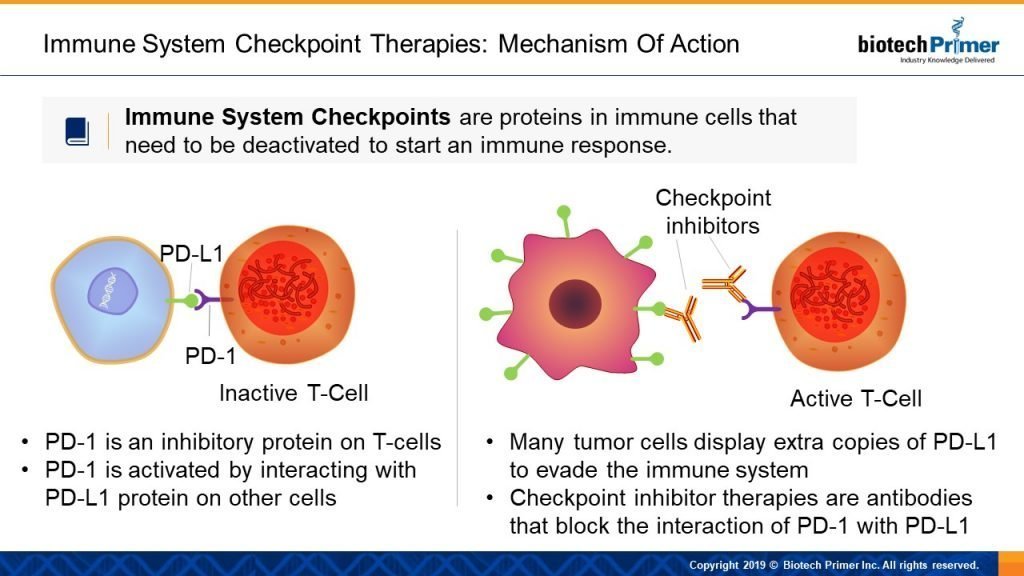 From Mice to People

The experiments in mice were the first step towards groundbreaking new cancer drugs. To translate this basic research into the clinic, Princeton-based biotech company Medarax (later acquired by Bristol-Myers Squibb) stepped in to develop antibody inhibitors of checkpoint proteins that would be safe for humans. The first of these, ipilumumab (later named Yervoy), targeted CTLA-4 and began clinical trials in 2000. Yervoy was the first antibody to target the immune system in the treatment of cancer rather than targeting the malignancy itself. In 2011, Yervoy was approved to treat melanoma.

The table below lists checkpoint inhibitors that have subsequently received approval: 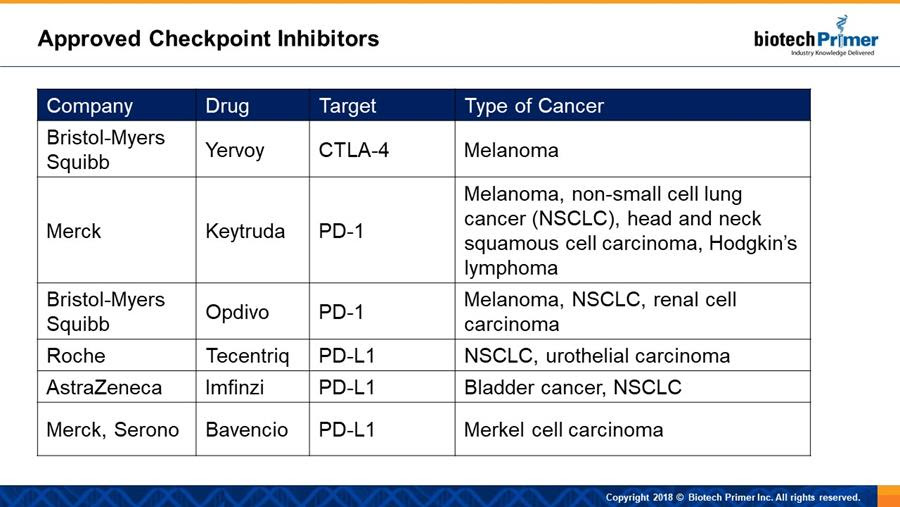 Oncologists are excited about these new therapies for two main reasons:

Researchers are working on identifying the next round of immune system checkpoint inhibitors by deciphering proteins such as LAG-3, TIM-3, TIGIT, VISTA.

Physicians try to identify the patients most likely to respond to a particular drug. For example, the best criteria for giving someone a PD-L1 inhibitor drug is if their bodies overexpress the PD-L1 protein on the tumor surface. Agilent Technologies (Santa Clara, CA) markets a companion diagnostic to identify patients whose tumors overexpress that particular protein. There may also be other ways to find patients right for checkpoint treatment. Early studies indicate that genetic signatures of tumors may help identify who will respond well to PD-1 inhibitors. The diagnostics company NanoString Technologies (Seattle, WA) is developing a genetic test that predicts who is most likely to benefit from checkpoint inhibitor therapies. Another possibility lies in looking at tumor biopsies to see if T-cells are already present. If so, it’s likely that switching them on via checkpoint inhibitors will treat their cancer.

The past few years have yielded a revolution in medicine. Clinical researchers are finally translating the insights of a few brilliant immunologists into a clinical reality. As a new generation of researchers and biotech companies continues to push the boundaries of knowledge and application, expect to see even more exciting revolutions ahead.