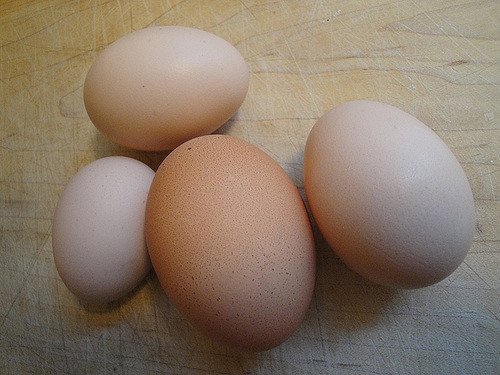 “The incredible, edible egg.” This advertising slogan created for the American Egg Board in the 1970s rings truer than ever. Here’s why: scientists at the Roslin Institute (Midlothian, Scotland), part of the University of Edinburgh, recently published a paper describing a novel, potentially cost-saving approach to the production of biologic drugs. The crucial element? Eggs. One estimate states that the new process could make manufacturing biologics one hundred times cheaper than existing methods. But how?

Take some chickens, fiddle with their genetics so that they lay eggs containing human proteins that fight cancer. This WEEKLY provides some details.

Roslin Institute scientists genetically modified chickens to lay eggs with either the protein interferon alpha-2a (IFN2a) or macrophage-CSF (M-CSF). Both are cytokines, a type of immune system signaling molecule. IFN2a treats hairy cell leukemia, malignant melanoma, AIDS-related Kaposi’s sarcoma, and other cancers. The interferon packs a two-fisted anti-cancer punch. First, it interferes with malignant cells’ ability to divide (this is actually the origin of the name “interferon”). Second, it revs up the immune system to fight cancer. The other cytokine, M-CSF, is being investigated as a therapy to stimulate damaged cells to repair themselves.

To get the hens to lay biologic-producing eggs, Roslin scientists deliver genes for each protein to chicken embryos via a by viral vector. Viral vectors are viruses that have been designed to deliver a specific gene to a cell, incorporating it into the target cell’s DNA. Integrating the gene for the protein into an embryo means it ends up in all of the embryonic cells, including those for the egg. (Article continues below)

Do you struggle to understand the basic science that your employer or clients are developing? Our 2-day BioBasics: Biotech for the Non-Scientist course in March will give you the science knowledge to hold your own in biopharma.
Register today!
BIOTECHNOLOGY FOR NON-SCIENTISTS COURSES
Keeping The Proteins In Check

Scientists want the chicken to produce the new protein only in her egg cells. Cytokines can be powerful medicine. That means that they can actually harm an animal by creating an overactive immune system. How can researchers ensure that the drug is only produced in egg cells? By including an egg-specific promoter with the gene that is transferred to the eggs. A promoter is a stretch of DNA that controls whether or not a gene is turned on or off in a specific cell type. An egg-specific promoter turns on the gene only in egg cells.

There’s also some good news for animal lovers. Life proceeds as normal for the birds– maybe even a little better. These very valuable, genetically enhanced chickens receive extra special care. They just go about their egg-laying business, completely unaware that their ova may in fact be golden.

The drugs described above are not the first medicines brought about through animal husbandry. In 2009, the FDA approved ATRyn, a recombinant version of the antithrombin protein. This anti-clotting and anti-coagulation factor is produced in goat milk. Manufactured by rEVO Therapeutics (Framingham, MA) ATRyn treats certain blood clotting disorders.

In 2015, the FDA approved Kanuma (Alexion Pharmaceuticals; Boston, MA), a recombinant version of lysosomal acid lipase. This enzyme helps break down fatty acids. The drug is produced in rabbit milk. It was approved to treat lysosomal acid lipase deficiency, an inherited disease which affects a number of organs.

ATRyn and Kanuma are medicines made in a small quantities for rare diseases. The Roslin group’s platform may be better suited to producing large quantities of drugs, due to the prodigious number of eggs one hen produces annually—over three hundred! Chickens also require less room and board compared to goats or rabbits. Lastly, there’s a lot of protein in each egg white. Three eggs contain enough cytokines for one dose of medicine.

No matter what animal, remember that neither its egg nor milk is the actual drug. Just as in “old-fashioned” biomanufacturing, therapeutic proteins need to be purified through column chromatography before they can be used in medicine.

You may have heard about flu vaccine produced in eggs. Cooking up flu vaccine, however, differs from making IFN2a or M-CSF. Instead of tweaking a chicken embryo’s genetics, technicians inject different strains of flu virus into eggs to grow. Once enough virus has propagated inside the egg “cocoon,” it’s removed, purified, inactivated, and formulated into vaccines.

Roslin Institute scientists have a history of making scientific breakthroughs. In 1996, the famous cloned sheep, Dolly, was created there. Dolly was the first mammal to be cloned from an adult cell.

As the world’s largest global biotechnology partnering event, the BIO International Convention (#BIO2019) is the one event where you can access 16,000+ attendees from 67 countries, network and set up meetings via BIO One-on-One Partnering™, and attend 150+ education sessions. Discover the next generation of cutting-edge products, therapies, and cures all week long.