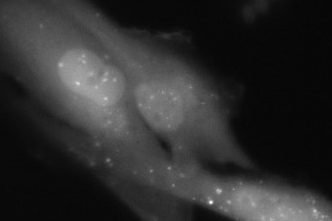 True, weird fact: our cells are cannibals. Right now, these itty-bitty sacs of vital fluids inside your body are eating themselves. This phenomenon is called autophagy, or “self-eating.”

This seemingly odd phenomenon is old news to biologists. They already know that autophagy is really about cellular cleanup and recycling, not cannibalism. It’s a highly regulated process by which cells disassemble unnecessary or broken bits into their component building blocks. Our bodies then use what used to be junk to make new parts.

Alas, like many bodily functions, autophagy sometimes run amok. Scientists have implicated problems with the process in a range of health issues including neurodegeneration, cardiac disorders and cancer. That’s bad news for those of us with bodies.

The good news is that biotech firms have noticed that out-of-whack autophagy can wreak havoc on our bodies.  Many are now working on interventions that activate or inhibit autophagy. The efforts may yield new approaches to disease and illness.

Autophagy occurs continuously at low levels in most cells. Here’s what happens: damaged or defective cell parts such as proteins, lipids, and even entire substructures (organelles) such as mitochondria, the energy-providing “powerhouses” of the cell, are enclosed in lipid vesicles – bubble-like containers composed of the same material as the cell membrane. The loaded vesicles then fuse with an organelle, called a lysosome, which has an acidic pH and contains digestive enzymes. The lysosome works somewhat like a stomach—its caustic “juice” breaks down cellular junk into its constituent bits. The “cellular stomach” then releases these back into the cell to form new components. Autophagy thus serves two purposes: “cleaning out” old or defective parts, and providing new building blocks.

Autophagy can also be also induced by cellular stress. Sometimes the stress arises from nutrient deficiencies. Sometimes it comes from a lack of oxygen (ischemic injury), infection, or the presence of damaged proteins or organelles.

Scientists suspect that autophagy protects our brains by flushing out toxic proteins that accumulate in disorders like Huntington’s disease, Alzheimer’s disease and Parkinson’s disease.

Defects in autophagy have been associated with the aggregation of mutant huntingtin proteins in Huntington’s disease and with the buildup of amyloid-beta plaques in Alzheimer’s disease. And in Parkinson’s disease (PD), defects in mitophagy are commonly associated with inherited types of PD. “Mitophagy” refers to autophagy directed at mitochondria – an important process for keeping these energy-producing factories healthy enough to fuel neuron function.

Autophagy is a double-edged sword when it comes to cancer. It helps suppress tumor formation thanks to its ability to protect cells from stress. However, if a tumor does end up developing, autophagy may end up feeding the tumor’s cells, instead of the body’s. In fact, most tumor cells display increased rates of autophagy.

Heart attack blocks oxygen flow to the heart, resulting in tissue death. Recent studies show that increased autophagy can help minimize this damage. Abnormal autophagy has also been associated with other problems including muscular problems, liver disease, and inflammatory disorders.

Biotech companies have begun to look at ways of harnessing the powers of autophagy for good. Let’s take a look at some of the possibilities:

Autophagy promises to be an important mechanism for a range of different therapeutic areas. These are still early days in translating these findings from the lab to the clinic, but stay tuned – this complex story has only just begun.