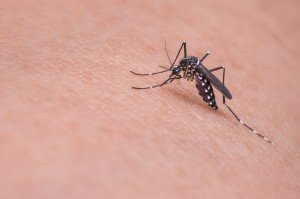 The buzz around the Zika virus isn’t going to die down anytime soon. The global health threat is dominating the news while the Brazilian outbreak threatens to spread to the rest of the Americas.

As the ramifications of the virus emerge every passing day, we here at Biotech Primer WEEKLY wonder: what is biotech doing to fight Zika? In this issue, we’ll examine the virus and learn how companies plan to exterminate Zika.

Term Of The Week: Vector

Epidemiologists call an agent that carries and transmits a pathogen into another living organism a vector. The Aedes aegypti mosquito serves as the vector for Zika virus, as well as dengue virus and yellow fever virus.

The Zeal Of Zika

Sporadic cases of Zika have been detected in humans since the 1950s in equatorial regions of Africa and Asia. In 2007, the first major outbreak occurred in Micronesia, with 49 confirmed cases reported. The current outbreak began in Brazil in April of 2015. The virus has now spread to other countries in South and Central America, the Caribbean, and Mexico.

The main route of Zika virus transmission is through the mosquito Aedes aegypti. When the mosquito bites an infected person, blood containing millions of tiny virus particles is taken up, the virus multiplies, and penetrates into the mosquito’s salivary glands. When an infected mosquito bites its next victim, Zika is injected and the person becomes infected. A less common route is the sexual transmission from an infected human. To date, the CDC has three confirmed and fourteen suspected sexually-transmitted Zika cases in the U.S.

For most, the virus causes mild symptoms such as fever, skin rash, and joint pain that go away in a few days with rest. However, public health officials report there may be an association between Zika and a slight increase in cases of the rare neurological disorder Guillain-Barre syndrome, a rapid-onset of muscle weakness caused by the immune system damaging the peripheral nervous system. Guillain-Barre syndrome is known to be triggered by certain viral infections.

The biggest concern is for pregnant women—Zika has been linked to microencephaly, in which babies are born with brains significantly smaller than normal. Microencephaly results in developmental delays, intellectual disability, seizures, difficulty swallowing, hearing loss, and vision problems (CDC). The mechanism by which Zika causes microencephaly is not known, although it has been confirmed that the virus is able to pass through the placenta. This is known as vertical transmission, or the passing of a virus from mother to fetus.

GMO Mosquitos To The Rescue?

Intrexon (Germantown, Maryland) is taking a high-tech spin on mosquito control by creating genetically engineered Aedes aegypti mosquitos in the lab. The mutants contain a gene that codes for a protein which prevents the expression of other genes critical for survival. When kept in the lab, the male mosquitos are fed an “antidote” which suppresses the expression of the lethal protein. When released into the wild, the male mosquitos will survive long enough to mate and pass this gene on, however, their offspring do not survive. The GMO mosquitos are currently making their way across Brazil, Panama and the Cayman Islands to complete efficacy trials. According to Intrexon, these studies show more than 90% reduction of the Aedes aegypti mosquito population.

An Ounce Of Prevention

Since there is no vaccine available for Zika, several companies have jumped at the challenge to prevent future outbreaks. Inovio Pharmaceuticals (Plymouth Meeting, PA), known for its expertise in DNA vaccine development, has recently begun a new Zika-focused vaccine program.

Hyderabad, India-based Bharat Pharmaceuticals has been working on a Zika vaccine since November 2014—before the current outbreak started. With both a DNA vaccine and a more traditional inactivated virus vaccine ready for testing, Bharat is currently seeking approval from the Indian government to begin preclinical trials in animals.

The race to beat the spread of Zika is on. By attacking the outbreak from all angles, we have a better chance containing—and maybe even exterminating—a potential world health crisis.