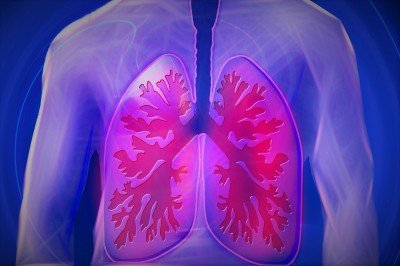 The hit TV series Breaking Bad features anti-hero Walter White, who starts out as a sympathetic character: a mild-mannered high school chemistry teacher with a nagging cough that turns out to be lung cancer. Money problems precipitated by costly treatments, poor insurance, and a modest salary push him to start cooking up meth to ensure the financial security of his family. Spoiler alert: The treatments succeed beyond his expectations, restoring his health long enough for him to become an unexpected meth kingpin.

Breaking Bad is a fictionally extreme example of the chaos that can arise from a lung cancer diagnosis. In fact, lung cancer is the leading cause of cancer-related deaths in the United States. Let’s take a closer look at the molecular causes, the different types, and some of the treatments in the clinic and on the market.

While Walter White did not smoke cigarettes, 90% of those affected by lung cancer are smokers. Other causes of lung cancer include environmental or workplace exposure to carcinogens (known cancer-causing agents) such as radon, asbestos, or air pollution.

Smoking
Smoking causes cancer because the inhaled smoke contains a range of chemicals, many of which are known to be carcinogens, including benzene, formaldehyde, methanol, and acetylene. Some carcinogens are genotoxic, meaning that they cause cancer by directly interacting with and damaging DNA. If that DNA damage occurs in a gene involved in regulating cell division, cancer may result. Non-genotoxic carcinogens have no direct interaction with DNA; rather, they disrupt cellular structures and change the rate of either cell division or processes that increase the rate of genetic error.

Radon Gas
Radon gas exposure can result in cancer because it is radioactive, and the high-energy radioactive particles given off as the gas decays can cause direct damage to cellular DNA. Radon gas is released from the normal decay of radioactive elements occurring naturally in soil and rocks. Radon is not considered dangerous because it is usually present at very low levels. However, it can sometimes build up to dangerous levels in well-insulated, tightly-sealed homes built on soil rich in uranium, thorium, or radium.

Asbestos
Asbestos used to be a common insulating material used in buildings and ships. The microscopic fibers in asbestos can be inhaled and become lodged in lung cells, triggering the activation of inflammatory pathways that result in the release of mutagens and factors that promote tumor growth. Since its hazards became well-documented in the mid-1970s, it is no longer used as insulation.

Genetics
In addition to carcinogen exposure, there are likely genetic elements that make certain individuals more or less susceptible to lung cancer. Even though 90% of lung cancer cases are caused by smoking, only about 10% of smokers get lung cancer. In African-American populations, even when differences in smoking rates and access to healthcare are controlled for, the rates of lung cancer are higher. Both of these scenarios suggest that there may be genetic factors that make certain people more (or less) susceptible.

About 10% of lung cancer is small cell, meaning it occurs in the very small cells found in the bronchii—the tubes that branch off of the trachea, enter the lungs, and divide into even smaller branches within the air sac.

There are currently no targeted therapies available for small cell lung cancer (SCLC), with chemotherapy and/or radiation as the main line of treatment. Therapies in development for SCLC include:

Cancer that occurs within any cell outside of small cells is referred to as non-small cell lung cancer (NSCLC), making up the majority (~90%) of lung cancer cases.

A number of drugs targeting new blood vessel growth—angiogenesis inhibitors—have been approved for the treatment of NSCLC. These include Avastin(Genentech; South San Francisco, CA) and Cyramza (Eli Lilly; Indianapolis, Indiana). These drugs cut off the supply of new blood vessels to the tumor, essentially starving them.

There are also drugs that target specific NSCLC–associated mutations. For example, between 10% and 35% of NSCLC cases are caused by the over-expression of the growth factor receptor EGFR. These types of NSCLC—more common in non-smokers—can be treated by drugs that target and inhibit this receptor. These include Iressa (Astra Zeneca; London, UK), Vectibix (Amgen; Thousand Oaks, CA), Tarceva (Roche; Basel, Switzerland), and Afatinib (Boehringer Ingelheim; Ingelheim, Germany).  Pfizer (New York, NY) has recently announced positive Phase III results of dacomitinib, a new small molecule inhibitor of EGFR, while Rain Therapeutics (Fremont, CA) has just completed Phase I trials of Tarlox, an EGFR-inhibitor for patients who do not respond to those already on the market.

Opdivo and Keytruda have also been approved for use in NSCLC patients.

Diagnosed with NSCLC, Walter White specifically had an inoperable stage 3A adenocarcinoma. This means the cancer was initiated in the mucus-producing cells of the lungs and had spread to the lymph nodes (or other sites near the lungs) but had not spread to distant sites within the body. Some types of adenocarcinomas are caused by ALK mutations, so it is possible that Walter’s miraculous recovery was caused by one of the ALK inhibitors discussed above.