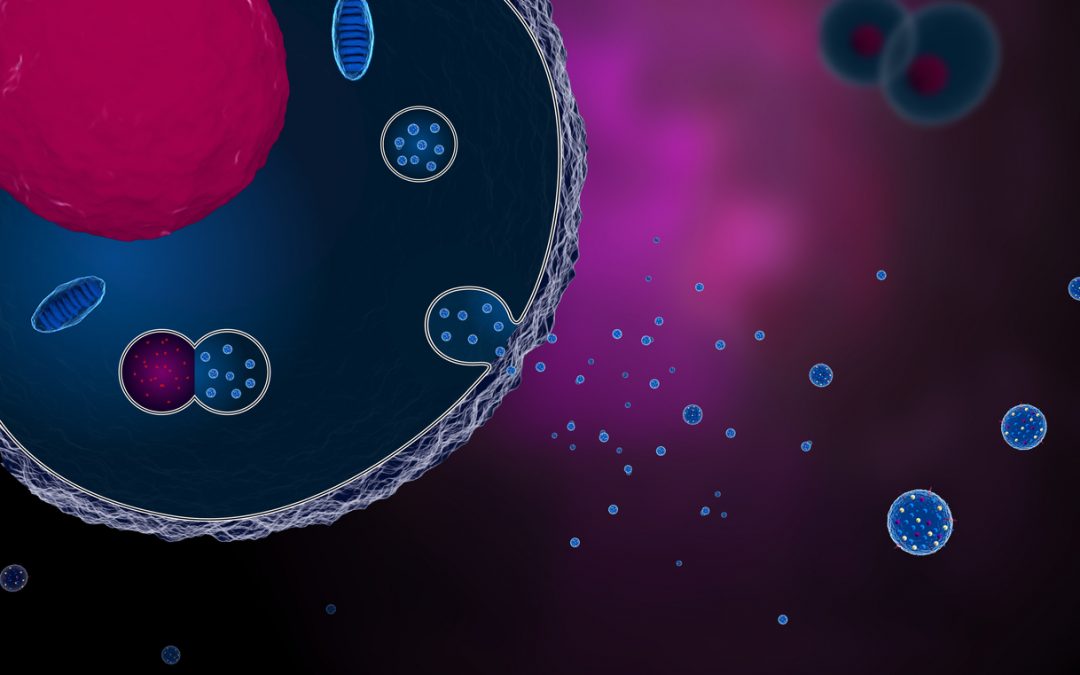 We’ve all heard the phrase “One man’s trash is another man’s treasure.” It turns out that what often holds true for the antique business sometimes holds true for biotech as well. This WEEKLY shows how.

Term of the Week: Exosome

There are these teeny tiny things each of our cells secrete called exosomes. (Stay with us.) The term exosome derives from the Greek words for “external” and “body.” They’re only about one one-hundredth the size of a typical human cell. They’re microscopic parcels secreted from cells and filled with cellular leftovers—RNA, proteins, and other remnants of metabolic processes. Microbiologists first discovered them in the 1980s. Initially, the scientists thought exosomes were a kind of cellular trash bag—providing a way to get rid of the molecules a cell no longer needed. In the past decade, it’s become increasingly clear that exosomes and what they carry play a role in intercellular signaling by delivering their contents to recipient cells. These tiny vesicles shuttle proteins and genetic information between cells, acting as molecular mail carriers. Exosomes play a role in activating the immune system, and are likely involved in other aspects of health and disease. Biopharma has turned its attention to figuring out how to use these miniscule containers to provide the means to deliver lifesaving medicines and aid in the diagnosis of disease. They may eventually even act as stand-alone therapeutics.

The most obvious application of exosomes builds on their role as cellular couriers to deliver drugs to target tissues that are not easily reached by conventional methods, such as the brain, or to deliver drugs that do not normally enter cells, such as monoclonal antibodies or other protein therapeutics.

But how does a drug get inside these tiny vesicles to begin with? First, exosomes come from cells grown in the lab. Once harvested, technicians load them with medicine in a number of ways. For instance, electroporation—jolting the exosome with pulses of electricity—creates a temporary permeability that allows the drug to enter the exosome.

Exosomes loaded up with medicine would then be injected into the patient. The exosomes find their target tissue based on proteins present on that tissue’s surface. The exosome’s lipid membrane is so similar to the cell’s own membrane that it’s able to slip inside when they come into contact, delivering its content to the cell.

Exosomes display affinities for tissue, based on the location in the body from which they come. Researchers control targeting by harvesting exosomes from cells known to produce exosomes that deliver their goods to a specific tissue type. For example, exosomes from pancreas cells come equipped with “radar” that sends them to lung cells.

Codiak Biosciences (Cambridge, MA) is developing another approach to getting drugs where they need to go via exosome. Their proprietary platform enables them to engineer cells that produce both exosomes that have specific contents and specific surface molecules that guide them.

Exosomal delivery makes an especially attractive option for drug makers with products that face significant delivery obstacles. These include RNA-based drugs that have struggled to achieve efficient delivery, and biologic drugs too large to enter cells. Aruna Bio (Athens, GA) has developed exosomes that ferry drugs across the blood-brain barrier—another common stumbling block to drug delivery. (Article continues below)

From Delivery to Drug Itself

Biotech companies are following up on this basic science by developing exosome-based therapeutics. Codiak Biosciences plans to begin Phase I clinical oncology studies of its treatments this year. Evox Therapeutics (Oxford, U.K.) is preparing to enter Phase I studies with an exosome-based therapy for lysosomal storage disorders. Research at Aruna Bio focuses on exosomes from neuronal stem cells that appears to reduce inflammation in the brains of mice and pigs and enhance their function. The company plans to develop these exosomes as therapies for stroke and amyotrophic lateral sclerosis (ALS). Finally, Celltex (Houston, TX) is also exploring the anti-inflammatory potential of neuronal stem cell-derived exosomes as a potential treatment for Alzheimer’s disease.

Exosomes may also enhance the diagnostic power of of liquid biopsies. The idea is to capture exosomes based on tumor-specific surface markers or to collect exosomes from blood or urine samples and identify them as cancer-associated by examining the genetic material inside. Aptly named Exosome Diagnostics (Waltham, MA) has an exosome-based urine test for prostate cancer on the market. Biopharmaceutical companies are still in the early stages of understanding the power of the onetime cellular trash bag, but all the signs point to a nanoscale revolution led by exosomes.