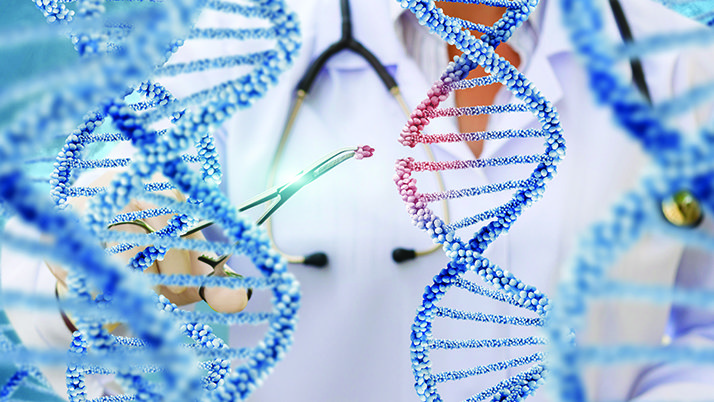 The Promise of Gene Therapy Unfolds

In many ways, 2017 was the year of gene therapy in the United States. Patients and pharmaceutical companies celebrated the approval of not one, but three treatments for otherwise untreatable health conditions. Researchers have been working on developing safe, effective gene therapies for three decades. Early trials were plagued with safety issues. Consequently, the field remained on hold until researchers could address those problems with new and improved gene-delivery vehicles. This Weekly explores these innovative approaches to intractable illness and disease.

The FDA approved the first gene therapies in the United States last year –Kymriah and Yescarta–both chimeric antigen receptor T-cell (CAR-T) therapies. They deliver a gene to cancer patients’ white blood cells in order to program them to attack specific cancer cells. CAR-T treatments involve removing a patient’s white blood cells, programming them to contain a cancer-destroying gene, and then re-administering them to the patient.

Two Firsts in One

Just before year’s end, the FDA approved a therapy for a rare form of inherited blindness. Developed by Spark Therapeutics (Philadelphia, PA), Luxturna is the first gene therapy to target a genetic disorder. It’s also first in another significant way. Unlike the new cancer treatments, patients receive Luxturna directly, via sub-retinal injection.

The blindness treated by Luxturna is known as “biallelic RPE65 mutation-associated retinal dystrophy.”

Clinical trial participants’ vision loss ranged from mild to severe. The trials included patients from ages four to forty-four. For 93% of them (27 out of 29), Luxturna treatment improved patients’ visual function, as shown by a “multi-luminance mobility testing (MLMT) score.” The MLMT measures the ability to navigate an obstacle course in low light.

Cost of a One-Time Cure

Luxturna is priced at $425,000 per eye. Most patients need treatment in both eyes. Its expense comes in part from the nature of the treatment as a one-time, cure. Spark Therapeutics is discussing payment options with insurers to help allay the sticker shock. One plan in the works with Pilgrim Health, a large non-profit New England-based insurer, hinges on outcomes. Should the treatment fail to meet the intended outcome at certain intervals post-treatment, Luxturna will refund the treatment’s cost. Another proposal in the works would allow insurers to spread payments out over multiple years.

Term of the Week: Vector

Scientists have adapted some viruses to transport therapies by tweaking them to target disease instead of causing illness. These souped-up microbes are known as viral vectors. They are the vehicles that make genetic therapy like Luxturna possible. The virus itself is simply a segment of genetic material— RNA or DNA—surrounded by a protein coat. Proteins on the surface of the vector (the modified virus) target proteins on a patient’s specific diseased or malfunctioning cell surface. These viral vectors then incorporate DNA into the patient’s genome by “tricking” the patient’s cells into producing the DNA it delivered. Ultimately, this enables a patient to make the functional protein that he or she lacked.

Over a decade ago, gene therapy stalled because of safety concerns. Researchers could not initially control the insertion point of modified genes. In some cases, the introduced genes disrupted patients’ other genes, causing serious illness. Researchers have now developed vectors that allow them to more precisely target where a therapeutic gene goes into a person’s genome, making the treatment much safer because it doesn’t interfere with the function of critical genes. 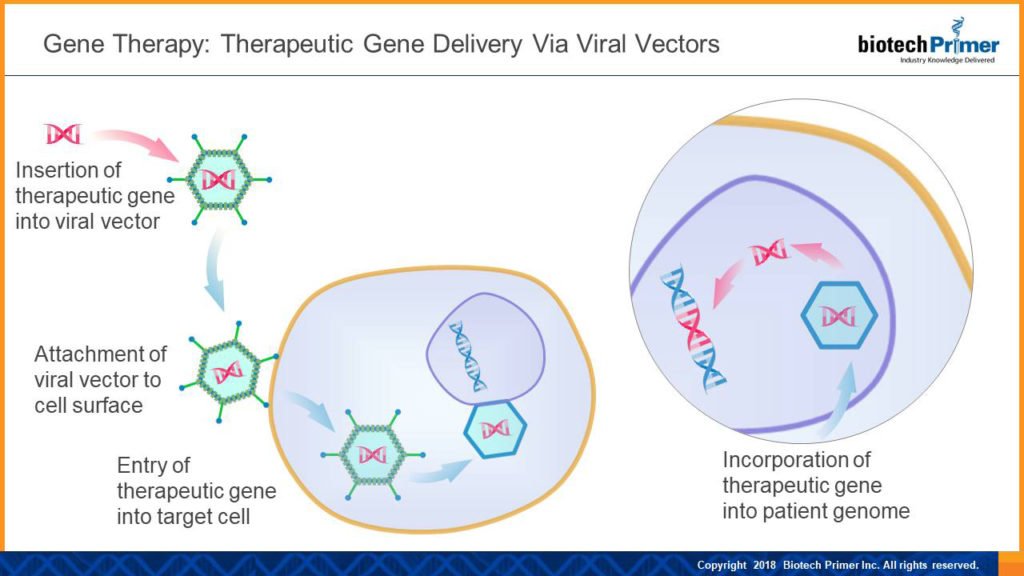 The most commonly used type of viral vector for gene therapy applications are adeno-associated viruses (AAV). However, AAVs aren’t the only vector in town. Lentiviral vectors are also being tested in gene therapy clinical trials. The choice of vector depends in part on the target tissue and the size of the genetic payload. AAV vectors so far seem to be best at targeting eye and muscle tissues, while there is some evidence that lentiviral vectors are better at targeting blood and central nervous system tissues. Lentiviral vectors have a higher carrying capacity as well, so may be preferred for very large genes or in cases where the goal is to deliver more than one gene.

Luxturna’s success raises hopes of cures for numerous other diseases caused by a defect in a single gene, including hemophilia, sickle cell anemia, Huntington’s disease, and other types of hereditary blindness. As the table below indicates, many companies have gene therapy treatments in clinical trials. 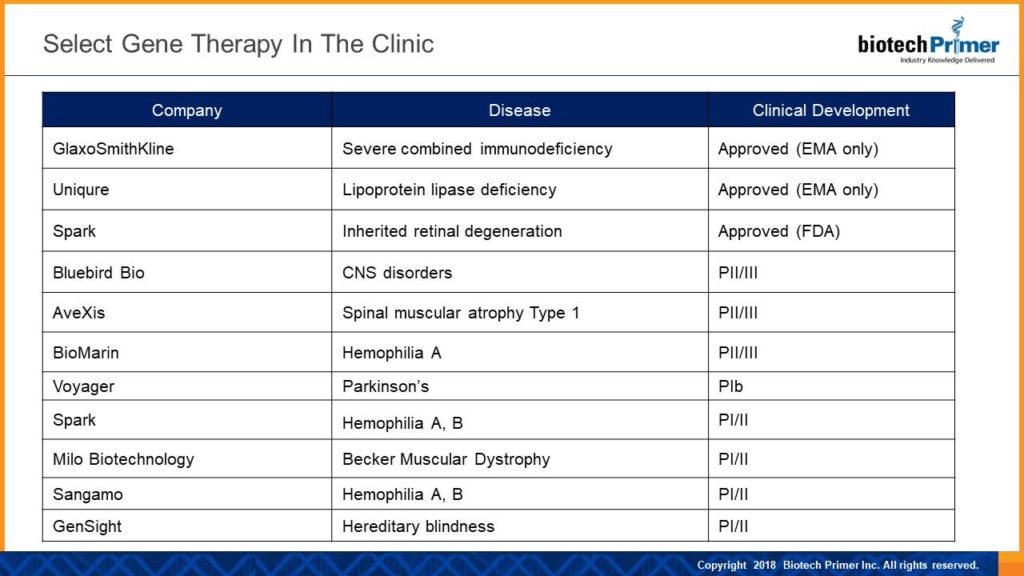 2018 may see more groundbreaking approvals as these treatments make their way through clinical testing.