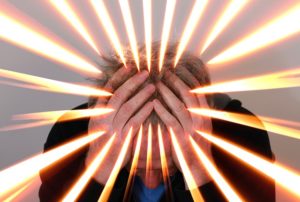 Last month the FDA approved Amgen’s (Thousand Oaks, CA) new migraine drug Aimovig, the first drug shown to prevent the onset of migraines. The drug significantly reduces the number of migraine days in difficult-to-treat (those that have failed 2 to 4 prior treatments) patient populations. In some patients dubbed “super responders”, migraines occurrence went from several times/month to no occurrence for 6 months. This is a big breakthrough that will have significant impact on the quality of life for migraine suffers who have not been able to find other forms of relief.

In this WEEKLY, we’ll review the science behind migraines and explain how Amgen’s new drug works.

ATTACK OF THE MIGRAINE

As many as 36 million Americans suffer from migraines—about 12% of the population. More than just a headache, migraines often include symptoms like intense pain, nausea, and extreme sensitivity to light or noise. They can last anywhere from a few hours to days on end. Episodes may be as frequent as several times a month, or as infrequent as a few times a year.

There are three distinct parts of a migraine episode; however, not all migraine sufferers experience these phases with the same intensity. Each set of symptoms is unique to the individual, and can include prodome, aura, or postdome phases.

THE SCIENCE BEHIND THE EPISODE

While the exact cause is largely unknown, there are a few theories:

The hot new kid on the block is calcitonin gene related peptide (CGRP) inhibitors. CGRP spikes during migraine attacks and is thought to play a role in the brain pathways that process pain. The exact molecular mechanism of how the CGRP spike is related to migraine onset is not yet fully understood, but CGRP is thought to sensitize nerves in the face, neck, and jaw, as well as alongside blood vessels surrounding the brain. A 2002 study provided strong evidence of a key role for CGRP in driving migraines. Injecting volunteers who were migraine-prone with the CGRP peptide induced a migraine within hours; injecting volunteers who were not migraine-prone resulted in a mild headache at worst. These studies helped to form the scientific basis for Amgen’s new monoclonal antibody (mAb) drug that blocks activation of the CGRP receptor. The antibody binds the receptor but does not activate it, and in so doing, prevents CGRP from activating the receptor.

Amgen may have garnered the first CGRP inhibitor approval, but several other companies are also working on drugs that target CGRP.  Eli Lilly (Indianapolis, IN) and Teva (Petah Tikva, Israel) both have filed for regulatory approval of mAb inhibitors directed at CGRP itself; Alder Pharmaceuticals (South Bothell, WA) has a CGRP-directed mAb in Phase III clinical testing. The idea is for the mAb to “mop up” CGRP before it reaches the receptor and triggers a migraine. Allergan (Dublin, Ireland) has a small molecule inhibitor of the CGRP receptor in Phase III clinical testing.

COCKTAIL FODDER: A HEADACHE OF THE PAST

We sometimes blame migraines on the stress of modern living. In some cases, stress is a trigger, but the headaches are hardly a modern phenomenon. Descriptions consistent with migraines are found in the ancient Egyptian medical text Ebers Papyrus, dating from 1550 B.C., as well as Hippocratic texts dating from 200 BC.