Further Down The Cancer Treatment Road With CARs

Chimeric antigen receptor (CAR) T-cell therapies have captured the imagination of both scientists and the public. The ability to genetically alter a patient’s own cells to fight cancer has revolutionized the treatment of certain types of blood cancers that were heretofore untreatable. So far, Kymriah (Novartis; Basel, Switzerland) and Yescarta (Gilead Sciences; Foster City, CA) have been approved by both the FDA  and the EMA, and several more are in clinical development.

This week, we’ll review the basics of what exactly a “chimeric antigen receptor” is, and turn our attention to an entirely new type of CAR: CAR-NK therapies.

A CAR That Does What?

But first, what exactly is a chimeric antigen receptor? CARs are manufactured proteins that molecular biologists and others engineer to appear on the surface of a white blood cell such as a killer T-cell. This new, revved-up receptor then targets the white blood cell to attack cancer cells.

A CAR consists of: 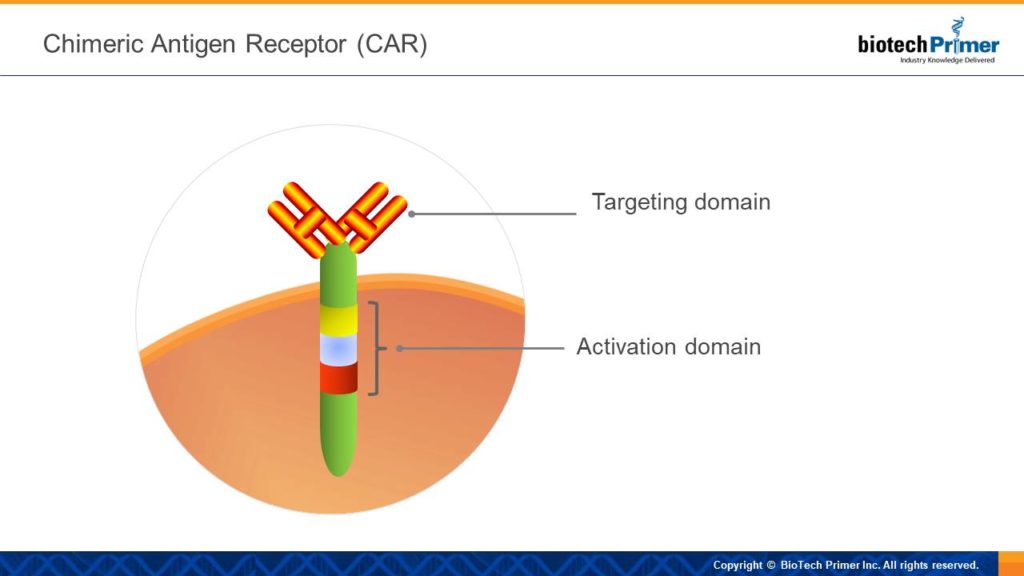 Need reminding how CAR-T cells work? Check out our WEEKLY on the topic.

Our immune system inherently includes NK (natural killer) cells. They are the body’s first responders. At the first sign of illness, NK cells attack the infection for two reasons. First, pathogens lack surface proteins called MHC1 that the body identifies as normal. Second, the presence of abnormal proteins tells the body that the invader poses a threat.

Many immunologists believe that prompt action by NK cells helps eliminate cancer cells early on—before they grow into a serious problem. However, in the early stages of tumor development, there are often not enough red flags—abnormal proteins on the cancer cell surface—to tag them as dangerous. Engineering NK cells to display a CAR “trains” them to recognize and respond to tumor cells. Once activated, the CAR-NKs behave much like killer T-cells, releasing cytokines that bolster the immune response to the cancer cells—killing the nasty cells by injecting even nastier toxins.

Besides avoiding potentially life-threatening reactions in already very ill patients, medical professionals can obtain donor NK cells relatively easily—for example, from umbilical cord blood. Labs modify these donor cells to express a CAR, which can then be given to the patient. Removing and engineering a patient’s own T-cells, then transfusing them back into the patient is much more time-consuming. The ability to more easily use donor NK cells means that biotech companies can create “off-the-shelf” products for this type of CAR therapy more readily. In addition, the resulting lower production costs mean more available treatments.

Chowing Down On Disease

Of course, NKs, modified or otherwise, aren’t the only white blood cells going toe-to-toe with cancer. Another approach involves the immune system’s scavengers or macrophages. “Macrophage” comes from Greek, meaning “big eater.” These cells kill invading or diseased cells by surrounding and digesting them. Leftover fragments of the alien cell’s proteins or antigens are displayed on the macrophage’s surface. These leftovers help activate some of the immune system’s other defenses, such as killer T-cells.

Researchers are now exploring the potential power of CAR-macrophages to destroy specific cancer cells. The enhanced macrophages will simultaneously activate other immune cells to also recognize and attack those same antigen-bearing cells. Like other macrophages, CAR-macrophages can penetrate solid tumors much more effectively than “plain old” T-cells.

If a typical T-cell does make it into a solid tumor, the cancer’s own defenses makes short work of it. In contrast, by modifying macrophages to treat solid tumors, doctors may be able to effectively get at cells inside the tumor. At the same time, the super-powered macrophages will “wake up” the patient’s suppressed T-cells to fight the cancer as well.

As biotech companies continue to translate these new applications of CAR into treatments, both patients and doctors can look forward to seeing an increase in the number of different types of cancer that respond to these cutting-edge immunotherapies.