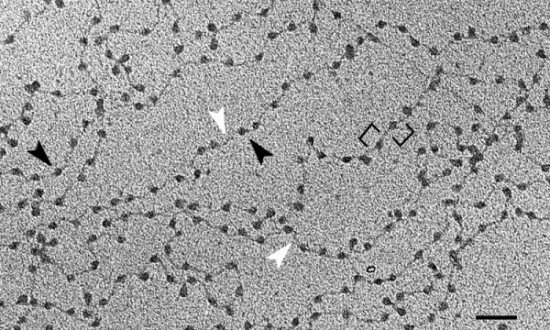 Catching a tumor’s first footprints is the holy grail of cancer research. The ability to detect and treat cancer early would put the collective mind of humanity at ease. Our best bet yet is the liquid biopsy—a minimally invasive test to detect and monitor cancer, which happens to be all the rage in cancer diagnostics.

Liquid biopsies uncover the beginnings of a tumor from tell-tale clues cancer cells leave behind in blood or urine. Examples include DNA released from dying cancer cells, exosomes secreted from cancer cells, and even rogue cancer cells themselves broken off from a tumor.

A new player on the block, Belgium-based VolitionRx, is developing liquid biopsies for colorectal and other cancers based on a novel biomarker: nucleosome structure. In this WEEKLY, we’ll tune in to the science behind nucleosomes and examine its role in cancer diagnostics.

Term Of The Week: Nucleosome

If we unraveled the DNA out of a single human cell, we’d have a six-foot long double helix. DNA undergoes extensive “packaging” to fit inside of a cell—it is wrapped around proteins called histones, in much the same way thread winds around a spool.

The basic unit of DNA packaging is called a nucleosome, which consists of a segment of DNA wound around eight histone protein cores. The DNA in our cells is a series of nucleosomes connected by linker DNA, or DNA not associated with histone proteins. The phrase “beads on a string” is often used to describe the final configuration. A picture of nucleosome structure captured by an electron microscope is shown below:

Changes to DNA that do not alter the actual gene sequence, but rather are chemical modifications to the DNA itself are the basis of epigenetics. These changes typically affect gene expression, or how the gene is read by the cells. Epigenetic modification can occur either directly to the nucleotide bases themselves (A, C, G, or T) or to the histones, which are small proteins that package and order DNA.

Histone proteins may also undergo a variety of other chemical modifications, including the addition of a phosphate group (phosphorylation), or ubiquitination. The exact combination of epigenetic modifications will determine the impact on gene expression.

Since epigenetic differences impact gene expression—how much or how little of a particular protein is made—it’s not surprising that various epigenetic changes are associated with different cancers. These epigenetic changes can be detected by examining nucleosomes. When cells (including cancer cells) die, enzymes in the cell’s nucleus cut the “linker DNA” connecting one “bead” (nucleosome) on a string to the next. These nucleosomes are then released into the patient’s blood.

Diagnostics based on collecting nucleosomes from a blood sample and looking for specific structural changes—epigenetic modifications —associated with cancer are in development by VolitionRx (Namur, Belgium). The test requires a very small amount of patient blood for analysis: approximately 10 microliters (one one-thousandth of a liter) as opposed to 5,000 microliters for other types of liquid biopsies. The company recently reported data demonstrating over 90% accuracy in colorectal, lung, and pancreatic cancer screenings, and is conducting additional studies in colorectal, lung, and prostate cancer.

The nucleosomes are then probed with antibodies that recognize cancer-associated epigenetic modifications. The extremely high specificity of antibodies allows for such precision—researchers are able to develop antibodies which differentiate between the same histone proteins with different epigenetic modifications. The antibodies used as protein-specific probes will typically have a fluorescent dye so the presence of the disease-associated protein can be detected by the change in color. VolitionRx’s test is able to differentiate between their testable cancers and other nucleosome-elevated conditions. 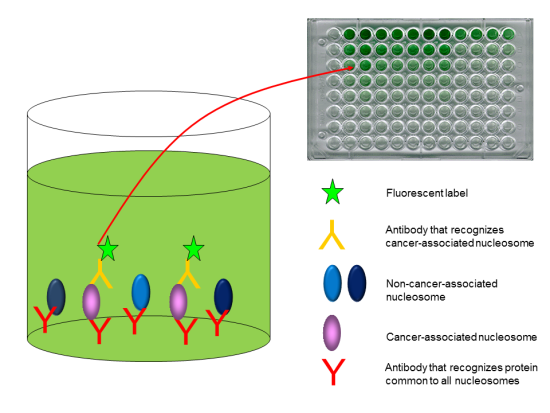 The new focus on liquid biopsies to uncover the hidden biomarkers of cancer might be the big win in stopping cancer early. With a slew of players in the race, it’s only a matter of time before we find the holy grail.