Driven by 19 new orphan approvals, a whopping 45 novel drugs were cleared for the marketplace in 2015. Additionally, new approvals opened up treatment options for Americans with diseases ranging from breast and lung cancers to irritable bowel syndrome. According to FDA numbers:

This week we picked a few of our favorites to examine, paving the way for better outcomes in cholesterol management, heart failure, and cystic fibrosis.

Praluent And Repatha Cut The Cholesterol

Two of the most anticipated new drugs were Sanofi’s (Paris, France) Praluent and Amgen’s (Thousand Oaks, CA) Repatha. Praluent made it to the finish line quicker, garnering the first-in-class designation before Repatha received approval a month later. Both drugs are PCSK9 inhibitors and monoclonal antibodies, but how do they work?

The body naturally keeps bad cholesterol in check with low-density lipoprotein (LDL) receptors. These receptors bind to excess LDL, which the liver cell absorbs. The liver breaks down the cholesterol and recycles the receptor back to the cell surface, where the LDL receptor can bind to and remove more LDL.

PCSK9 is a protein that also binds to the LDL receptor, which also triggers the liver cell to absorb the pair. However, the entire complex is degraded and the receptor is not recycled—sort of like a murder-suicide. This results in fewer LDL receptors, impeding the process of LDL removal.

Repatha and Praluent work by attaching to PCSK9, which prevents the protein’s interaction with low-density lipoprotein receptors on the surface of liver cells. By preventing the degradation of these critical receptors, PCSK9 inhibitors lower LDL levels and lessen the risk of a cardiovascular event. Clinical results report lowering of LDL levels by as much as 60%. One key advantage of the new PCSK9 inhibitors is their safety profile—in clinical trials, the adverse events observed were equivalent to that of the placebo.

Novartis’ (Basel, Switzerland) new heart failure drug, Entresto, has created a lot of buzz due to its strong efficacy and clinical demand. This first-in-class small molecule drug was fast-tracked due to impressive clinical trial results.

Entresto is a combination drug: Valsartan and Sacubitril. They work together to lower blood pressure, which lowers the strain on the heart and lessens the accumulation of fluid in the tissues, such as the lungs—a key symptom of heart failure.

Angiotensin II is a small hormone. When it attaches to the angiotensin receptor, it causes a cascade of reactions to occur. That cascade ultimately causes blood vessels to constrict, which causes blood pressure to increase. Think about it like this—it takes more pressure to move a fluid through a narrow tube than through a wide one. Angiotensin II also promotes the release of a second hormone, aldosterone, which increases sodium retention by the kidney and further drives up blood pressure.

By blocking the angiotensin receptor, angiotensin II has nowhere to land. No reaction cascade. No blood vessel constriction. Blood pressure is lowered.

By combining an angiotensin II receptor inhibitor and a neprilysin inhibitor, the effect is enhanced, allowing Entresto to get to the heart of the matter.

Vertex Pharmaceuticals (Boston, MA) further strengthened its role as the leader in cystic fibrosis (CF) therapies with the approval of its second game-changing small molecule drug, Orkambi. Orkambi is a first-in-class therapy that gained both fast track and breakthrough status.

CF is a rare genetic disease caused by one of several possible mutations in the gene encoding the “cystic fibrosis transmembrane conductance regulator” (CTFR) protein. The CTFR protein is critical for the movement of mucus. CTFR is classified as a channel protein—a category of proteins that create a channel, or tunnel, across the cell membrane. This specialized gateway allows things to pass into and out of the cell that otherwise are denied entry or exit. Negatively charged chloride ions use CTFR to exit cells, and if the CTFR is not functioning correctly, the chloride ions build up inside of cells. This build up affects the fluid balance of tissue, resulting in the characteristically thick mucus seen in the lungs of CF patients, making them vulnerable to fatal lung infections.

In 2012, Vertex won FDA approval for Kalydeco, ushering in the first CF drug to treat the underlying cause of the disease. Kalydeco works by binding to the misfolded CTFR protein and increasing its ability to remain open and functional on cellular surfaces—a CFTR potentiator. Although highly effective, it is only a lifesaver for 10% of CF patients. Kalydeco is not helpful to patients whose mutation causes the CTFR to not reach the cell surface.

When Vertex combined Kalydeco with newly developed lumacaftor, a dynamic duo was born—coined Orkambi.  The lumacaftor portion targets the most common mutation, a single amino acid deletion in the CTFR protein. In patients carrying this mutation, the channel is so misfolded it never makes it to the cell surface. Lumacaftor is a CFTR corrector; it works by binding to and stabilizing some of the misfolded proteins, improving their ability to travel to the cell surface. Once there, Kalydeco kicks in and improves the function of CTFR, bringing positive outcomes to a large part of the CF community.

A Look Back On Biologic Approvals

The primary entity within the FDA responsible for drug approvals is known as Center for Drug Evaluation and Research or CDER. CDER reviews most New Drug Applications (NDAs) and Biologics License Applications (BLAs). The following chart shows the distribution of NDAs versus BLAs over the past fifteen years. 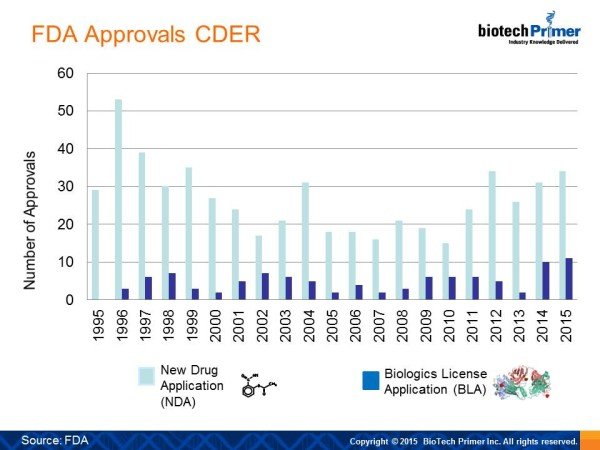