The front runners in the game of drug delivery include small molecule and large molecule drugs, but there is another class that lands right in between: peptides.

Let’s review the differences between the drug classes and explain where peptides fit into the picture. Then we’ll take a spectator’s interest in the companies and products leading the charge in peptide therapeutics. 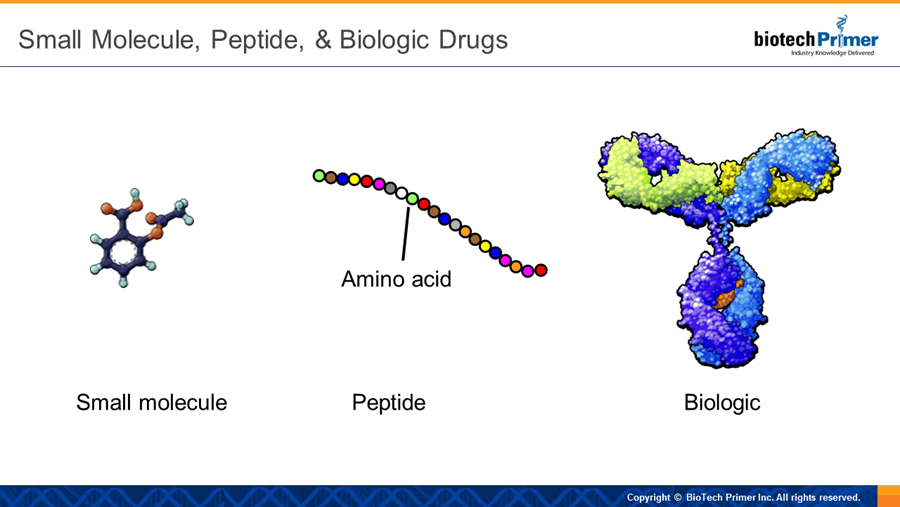 Examples of peptide drugs on the market today include glucagon-like peptide-1 (GLP-1) receptor activators, such as Byetta (AstraZeneca; Cambridge, England), Victoza (Novo Nordisk; Bagsvaerd, Denmark), and Trulicity (Eli Lilly; Indianapolis, Indiana). These peptide drugs work by interacting with a receptor on the surface of pancreatic beta cells and stimulate the release of insulin for diabetes.

Setmalanotide works by activating the melanocortin-4 receptor (MC4R), a receptor present on the surface of cells in the hypothalamus of the brain, a region involved in regulating both appetite and satiety. Mutations in MC4R that result in reduced activation are the most common genetic cause of obesity, and account for approximately 6-8 percent of obesity cases.

Kalos Therapeutics (San Diego, CA) has a peptide drug in development based on a straightforward observation: despite constant activity, heart muscles don’t get bigger, and cancers of the heart are extremely rare. At least part of the reason for this is a peptide known as atrial natriuretic peptide (ANP), which is produced in the heart. It helps to control cell growth and division, making sure that the heart doesn’t get too big for the chest. Since cancer is caused by out-of-control cell growth and division, a connection was made: perhaps these peptides could play a role in controlling tumor cell growth.

Kalos Therapeutics has identified a portion of ANP and is synthesizing and testing it as a potential anti-cancer agent. Dubbed KTH-22, the agent is cytostatic, meaning it halts the growth and division of cancer cells, but does not directly kill them as a cytotoxic (toxic to cells) agent would. KTH-22 is in preclinical research, with data supporting its use in the treatment of pancreatic and ovarian cancers.

Aileron Therapeutics is developing “stapled peptides.” These peptides are synthesized according to an optimized amino acid sequence. Next, a chemical linker is used to connect two amino acids within the chain, creating a folded or “stapled” version of the peptide. These stapled peptides still recognize their target protein, are more stable, and better able to penetrate cell membranes than the linear versions.

Aileron’s leading stapled peptide candidate, ALRN-6924, activates p53, a protein that triggers cell death in cancer cells but is inactivated in a range of malignancies. ALRN-6924 is in Phase II clinical studies for lymphoma. The company is pursuing the development of stapled peptides in a range of therapeutic areas, including inflammation and endocrine and metabolic diseases.

Bicycle Therapeutics also uses chemically-linked peptides to increase stability, target interaction, and penetrate cells. Their peptides are formed — using a chemical linker — into the shape of a bicycle.

Bicycle’s lead candidate, BT1718, is a “bicycle drug conjugate” — a bicyclic peptide with a toxic drug attached. The peptide targets a protein called “membrane type 1 matrix metalloproteinase” (MT1-MMP) which is overexpressed in many tumors. BT1718 delivers its toxic payload to tumors overexpressing MT1-MMP. BT1718 is now in Phase I clinical studies for solid tumors. 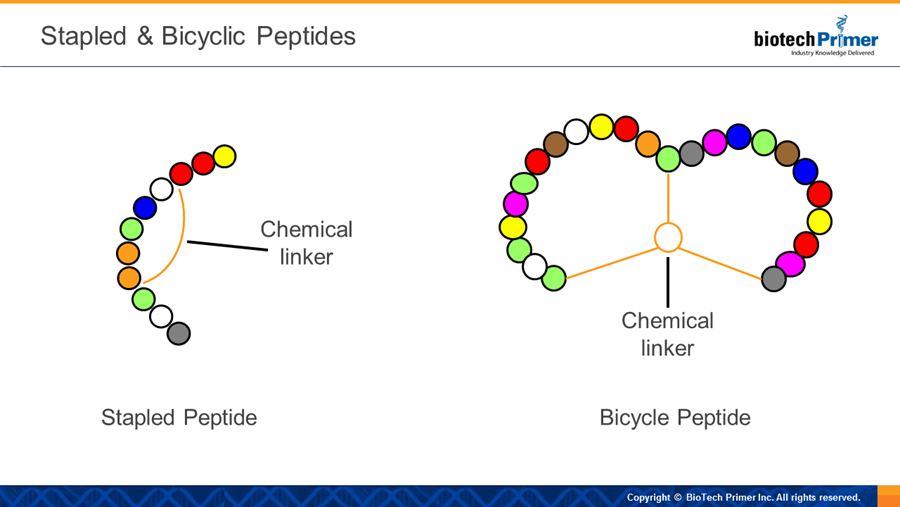 Already capable of affecting a range of therapeutic targets with high specificity, continued innovations in peptide design and delivery should make this class of drugs an important player.