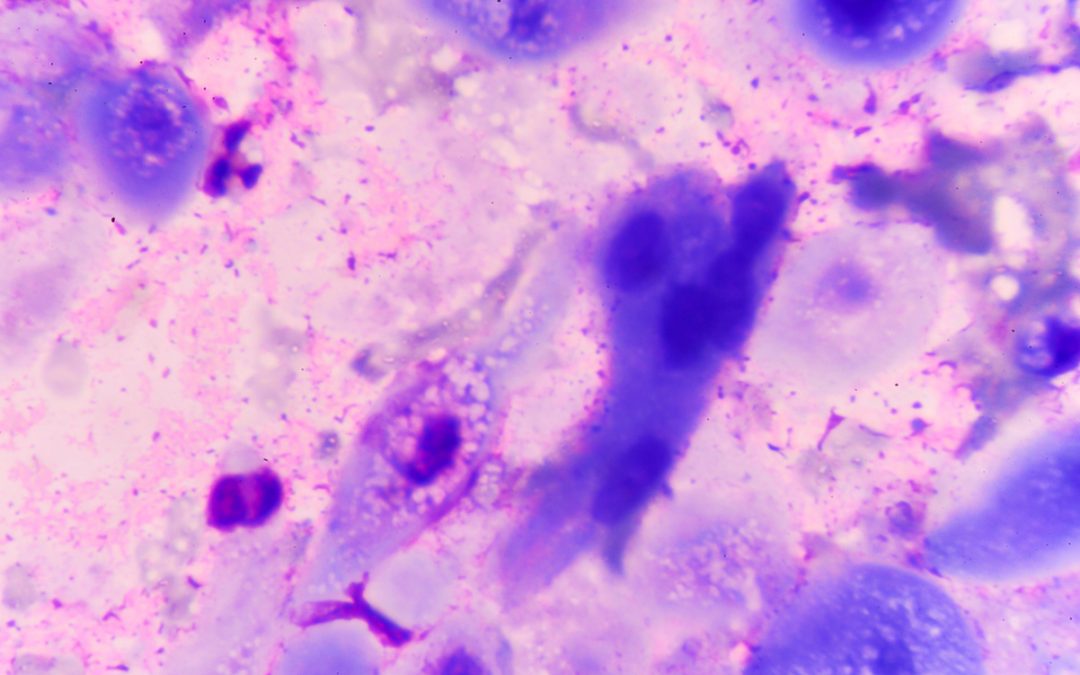 We at the WEEKLY aim to keep you up on the coolest, latest innovations in biotech. Bonus: we might also help you win Jeopardy. Ready? The category is Rare Diseases for $1,000. The clue is “Amyloidosis.”

Ding ding ding! Alex, what is a group of diseases caused by the abnormal buildup of proteins in tissues and organs? You win!

Maybe some reader out there will win Jeopardy. Meanwhile though, it’s the patients who suffer from maladies associated with these protein clogs and their families who are really poised to win. Because last year, the FDA approved two new drugs to treat hereditary transthyretin amyloidosis (hATTR). 2019 may see another approved as well. This week, we explore the science behind this uncommon but debilitating illness, and look at the brand-spanking new treatments for it.

First, more about amyloidosis. What the heck are amyloids? Short answer: proteins that build up in organs like the liver, spleen and in other tissues. Scientists call the collections amyloid fibrils–clumps of proteins that fold into a shape that allows many copies to stick together.

Many different proteins form amyloids. Perhaps the best known comes from amyloid-beta, and is associated with Alzheimer’s disease.

The protein transthyretin can also cause amyloidosis. Produced in the liver, transthyretin transports thyroid hormones and vitamin A throughout the body. Mutations cause transthyretin to form amyloid fibrils, which accumulate, especially in the heart and nervous system. These deposits result in a range of symptoms, including cardiomyopathy–congestive heart failure and abnormal heart rhythms. Amyloid accumulation in nerves can cause tingling, numbness, or burning pain anywhere in the body. It also sometimes leads to weakness and loss of mobility. Doctors call this assembly of problems polyneuropathy. If protein clumps damage the nerves that assist in organ function, digestion and kidney complications follow.

Let’s look at the new drugs approved to prevent this problem.

The first drug approved to treat polyneuropathy associated with hATTR was Alnylam Pharmaceutical’s (Cambridge, MA) Onpattro in August 2018. Onpattro was also the first FDA-approved drug to work by RNA interference (RNAi), or gene silencing. This approach aims to reduce how much protein a specific gene produces – in this case, the mutated transthyretin gene. Onpattro does this by destroying the gene’s RNA – recall that the information in genes is first converted to RNA, which is then translated to a protein. Less mutated transthyretin protein means fewer amyloid fibrils, which means reduced polyneuropathy.

To activate the pathway, researchers introduce a double-stranded or “hairpin” shaped RNA. In the case of Onpattro, this RNA hairpin is the drug.  The enzyme DICER cuts it up to produce a “short interfering RNA” (siRNA). The siRNA binds to a second enzyme, RNA-induced silencing complex (RISC). RISC alters the RNAi so that only a guide strand which is complementary to the target RNA remains. This guide strand/RISC complex then attaches to the problematic transthyretin mRNA and destroys it. 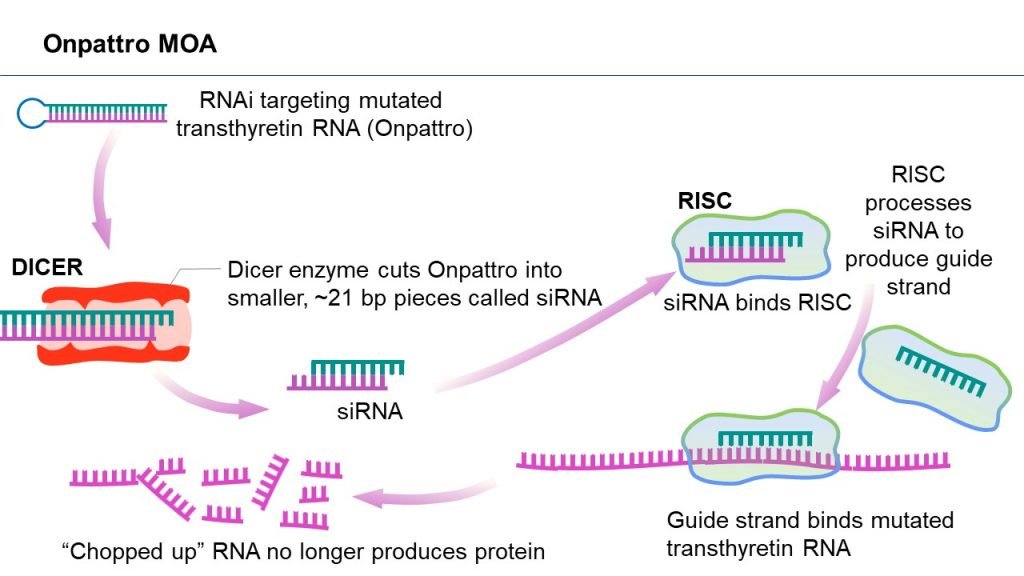 Tegsedi, from Ionis Pharmaceuticals (Carlsbad, CA) and Akcea Therapeutics (Boston, MA), was the second drug approved for hATTR-associated polyneuropathy, in October 2018.  Tegsedi is an antisense drug. Like Onpattro, antisense drugs activate a cellular pathway that destroys a targeted RNA. They are short, synthetic pieces of RNA whose sequence complements the RNA that codes for a disease-associated protein. When the drug enters a patient’s cells, it binds to the disease-causing RNA. This binding triggers an enzyme called RNAse H to wipe out the antisense-target RNA duo. Once again, no RNA means no protein to form amyloid fibrils. 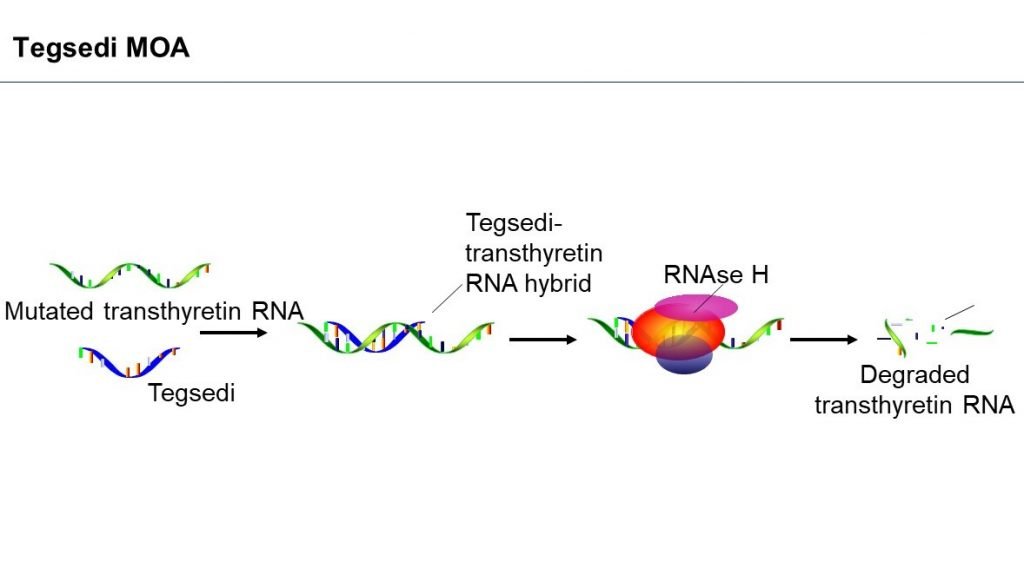 Patients self-administer Tegsedi weekly. This is more convenient than the Onpattro infusions. However, some patients and doctors may prefer the Alnylam medication due to its better safety profile.

Next In Line: Tafamidis

The European Medicines Agency (EMA) has approved Pfizer’s (New York, NY) drug tafamidis for hATTR polyneuropathy.  The FDA is expected to okay the drug in 2019 for hATTR cardiomyopathy. Unlike the previous treatments which act on RNA, tafamidis is a pharmaceutical chaperone. In other words, it’s a small molecule drug that helps transthyretin fold correctly, resulting in fewer garbled proteins to form amyloid fibrils and cause disease. Like most small molecule drugs, it is administered orally.

Although hAATR is very rare – estimated to affect about 50,000 people worldwide – non-mutated transthyretin forms amyloid fibrils in ten to twenty percent of the elderly, contributing to cardiomyopathy.

Next week, we’ll widen our focus from a rare disease to a growing public health epidemic: Nonalcoholic Steatohepatitis (NASH).