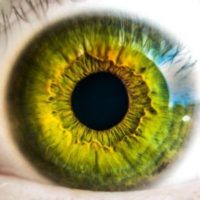 Getting old is for the birds. Time has its way with nearly every part of us: skin, hair, muscles. Few changes are more alarming, however, than those to our eyes. There’s more to old eyes than bifocals and cataracts though. One of the most common eye diseases is age-related macular degeneration (AMD). It affects more than 13 million people over age 50 in the United States. It’s the leading cause of vision loss in this age group. This WEEKLY takes a closer look at AMD and the ways in which the biopharma industry is working on treatments.

Eyes are spectacularly complicated organs: they contain over two million moving parts. You know some of the basics: iris, pupil, lens, retina. In some ways, this last, the retina, is more accurately considered part of the brain.

Term of the Week: Retina

The retina is composed of light-sensitive nervous tissue which forms a thin membrane that lines the rear two-thirds of the eyeball. It takes in light from the world around and converts into neural signals that travel along the optic nerve to the brain, telling us—“Hey, there’s an apple, or a laptop, or whatever.” 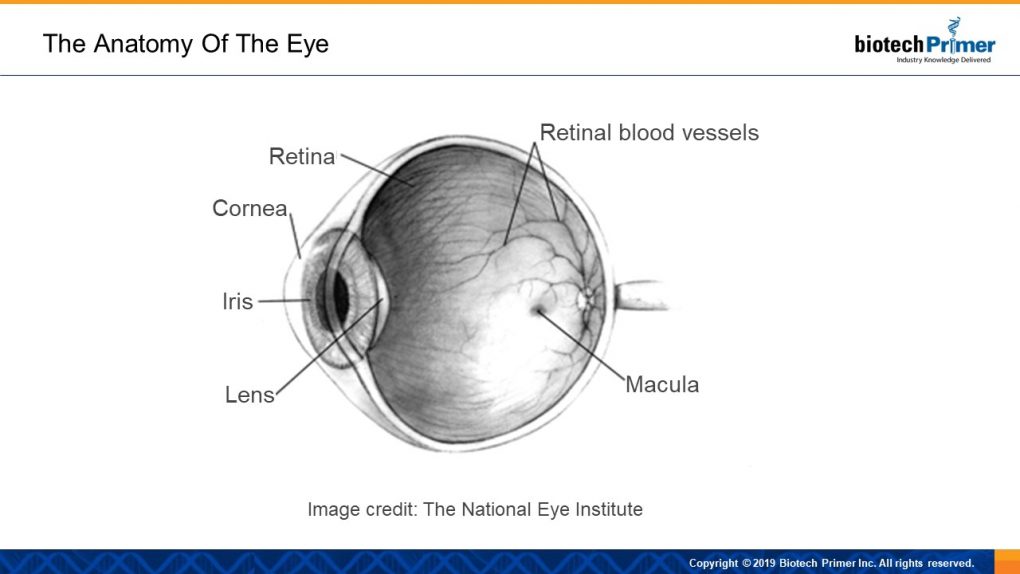 The macula is the small central area of the retina that enables central, high-resolution, color vision.

A Gradual Loss of Vision

Macular degeneration progressively devastates eyesight, causing blurred vision and blocks the center of a person’s visual field. What begins as a minor annoyance ends up making everyday tasks such as reading and driving impossible.

Ophthalmologists and other scientists don’t know exactly what causes AMD. It is however, associated with a buildup of proteins and lipids just beneath the retina. These deposits, drusen, are a normal part of aging. However, the presence of larger or more drusen raises the risk of AMD. As the disease progresses, vision decreases. There are two types of AMD: neovascular (wet) or atrophic (dry). (Article continues below)

In wet AMD, the infiltration of excess blood vessels is the main culprit. These abnormal vessels often leak fluid and blood, injuring the retina. Wet AMD progresses quickly, leading to loss of central vision without treatment. This form of the disease accounts for about 10 percent of cases.

These work by mopping up excess vascular endothelial growth factor (VEGF), which causes the excess blood vessel growth. Lucentis and Beovu  are monoclonal antibodies specific for VEGF. Eylea consists of the VEGF-receptor fused to the constant region of an antibody for stability. Similar to a mAb, this combination is called a fusion protein. It’s highly specific for VEGF, binding it before it reaches its intended receptor on the surface of blood vessels. These VEGF-blocking treatments effectively stop the progression of AMD, but don’t cure it.

Kodiak Sciences (Palo Alto, CA) is working on an antibody-biopolymer conjugate (ABC) called KSI-301, which also targets VEGF. An ABC is an antibody with a biopolymer—a chain of repeating subunits produced by a living organism—attached. In KS-301, the repeating subunits are lipids. They make the antibody more stable. That means patients can go up to five months between injections, compared to one month (Lucentis), two months (Eylea), or two to three months (Beovu). The treatment is now in Phase II/III development.

These therapies are injected in the patient’s eye, which makes them understandably unappealing. As an alternative, PanOptica (Mount Arlington, NJ) is developing PAN-90806. Patients could administer this small molecule inhibitor of VEGF at home by eyedrop. The drug has completed Phase I clinical studies.

Dry AMD involves a gradual breakdown in the macula’s light-sensitive cells. The dry variety progresses much more slowly than wet and accounts for about 90 percent of AMD cases. Advanced dry AMD occurs when cells in regions of the retina have wasted away and died. Sometimes these regions of atrophy (death) look like a map to the physician who is examining the retina, giving rise to the term “geographic atrophy” for late-stage dry AMD.

Currently, no treatments exist for dry AMD. However, some studies suggest that high doses of antioxidants including C and E vitamins, copper, zinc, and beta-carotene may slow its progression.

Last month, the National Eye Institute announced preparations to begin clinical testing of stem cells for dry AMD. In the lab, researchers have coaxed stem cells to grow into retinal cells. In rodent and pig models, these cells restored vision, setting the stage for testing in humans.

Most macular degeneration is connected to aging. However, Stargadt disease and other juvenile forms are associated with several different genes. Also referred to as macular dystrophy, all juvenile varieties are inherited. They have no cure or treatment. The therapies under development for dry AMD may also prove useful in Stargadt disease.

Biopharma is hard at work developing more patient-friendly treatments for wet AMD and the first ever treatments for dry AMD. Look for future developments here.