The Mechanics Of Melanoma 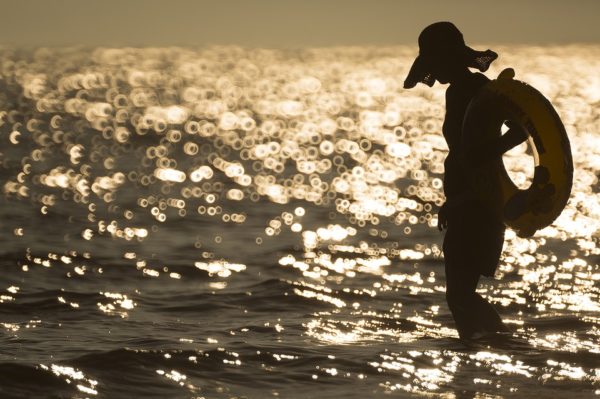 Despite restricted access to parks and beaches due to the COVID-19 pandemic, people everywhere continue to seek solace in outdoor activities, enjoying a walk through the neighborhood or a cold drink on a hot afternoon in a sunny backyard. Fresh air and sunlight are two things everyone agrees are good for your health – but don’t forget the sunscreen!

May is Melanoma Awareness Month, so this week we’re taking a deep dive into the science behind this potentially deadly cancer and how it’s treated. Melanoma accounts for less than one percent of skin cancer cases, yet accounts for the vast majority of skin cancer deaths. If detected early enough, melanoma is almost always curable. If not, its ability to metastasize makes it difficult to treat.

Melanoma is more common in young adults than many other types of cancer, with 25 percent of new cases occurring in people under age 45. Its prevalence is growing—the number of new cases per year relative to the total population has doubled since 1973. In 2019, there will be an estimated 96,480 new cases of melanoma in the U.S. and 7,230 melanoma-related deaths, according to the Aim at Melanoma Foundation. Let’s review the basics and find out the latest treatments in the battle against melanoma.

Melanoma is the uncontrolled growth of the pigment-producing cells known as melanocytes, which are located in the bottom layer of the skin’s outermost layer (the epidermis). Like other types of cancers, melanoma arises from gene mutations in these cells that impact cell growth and division. In the case of melanoma and other skin cancers, the DNA damage is usually caused by ultraviolet (UV) radiation, resulting in a tumor that initially grows in the skin, spreading along the epidermis. If the melanoma is detected at this stage, it can often be surgically removed. If the out of control cell growth is not caught in these early stages, it penetrates deeper layers of the skin, eventually coming into contact with lymph and blood vessels that enable it to spread to other parts of the body. When melanoma spreads to other parts of the body, it is known as metastatic melanoma.

Lighter-skinned people are at higher risk for melanoma because the increased skin pigmentation found in darker skin tones helps to block UV rays from penetrating and damaging skin cell DNA. However, darker-skinned people can and do get melanoma. Another general risk factor for melanoma is atypical moles, or moles with irregular shape, color, or size. Moles are clusters of melanocytes, and so sudden changes in them may be an early warning sign of melanoma.

Although most cases of all types of skin cancer are traceable to excessive sun exposure, about 10 percent are likely due to genetic factors. The gene most commonly mutated in familial melanoma is p53. p53 is a “tumor suppressor” which means that it detects DNA damage in cells, and triggers either DNA repair pathways or activates cell death if the DNA damage cannot be repaired.

Another gene, known as the BRAF gene, regulates cell growth and is mutated in inherited forms of melanoma. About half of all genetically-based melanomas have the BRAF mutation.

Let’s take a closer look at BRAF. BRAF codes for a protein required for the transmission of a growth signal from a cell surface receptor to the cell nucleus (growth signal transduction). Growth signaling is initiated by a growth factor binding to its receptor. This binding transmits a signal through the membrane, causing the internal portion of the receptor to interact with and activate a protein inside of the cell. This activation is then transferred to the next protein in the pathway, and so on until the signal reaches the last protein in the pathway. When this protein is activated, it enters the nucleus, where it turns on specific genes that make proteins which initiate cell division. BRAF is one of the proteins in this pathway. In BRAF-associated melanoma, the mutated BRAF is always turned on even when no growth factor is present. 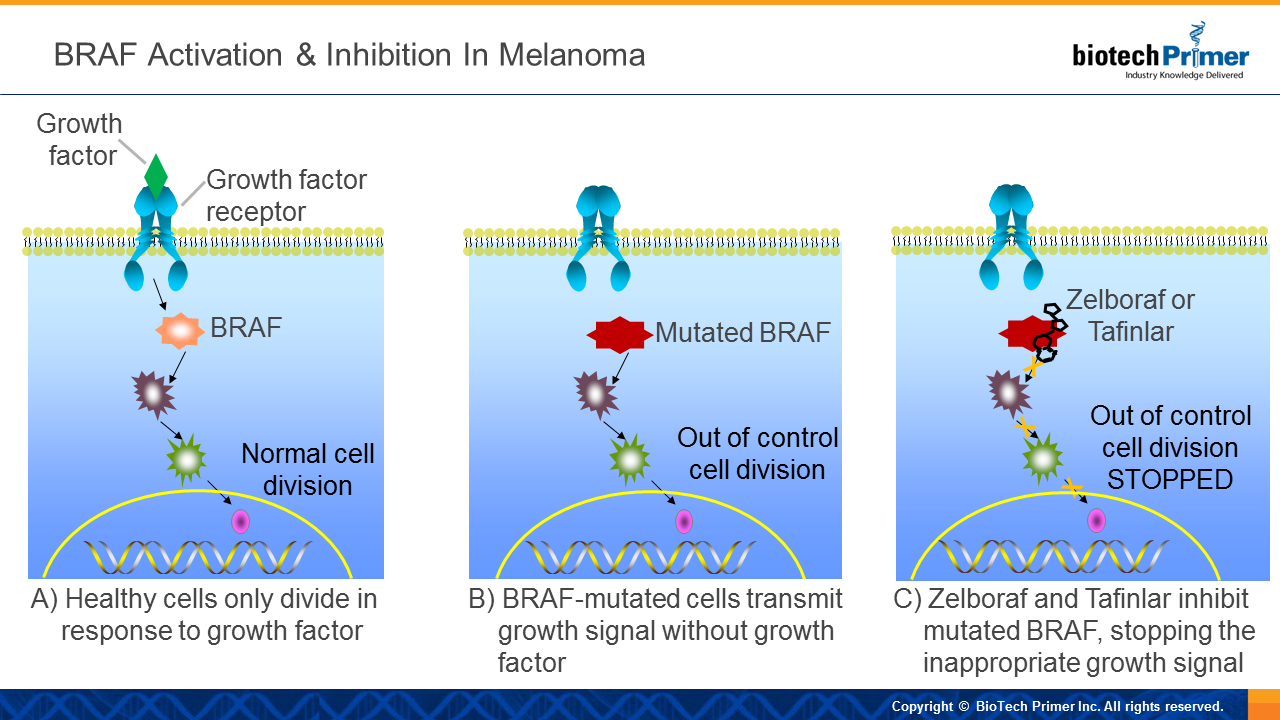 A few different checkpoint inhibitor therapies are on the market for metastatic melanoma. These therapies enable killer T-cells—immune system cells that recognize and kill threats such as cancer cells—to become fully activated and able to kill tumor cells. Keytruda (Merck, Kenilworth, NJ) and Opdivo (Bristol-Myers Squibb, New York, NY) both target PD-1, an inhibitory protein on the surface of T-cells; Yervoy (Bristol-Myers Squibb) targets a second inhibitory protein, CTLA-4. Both PD-1 and CTLA-4 essentially act as “off switches” for killer T-cells. By inhibiting these off switches, the killer T-cells become fully activated, and able to kill melanoma cells. Opdivo (Bristol-Myers Squibb) is yet another checkpoint inhibitor approved to treat melanoma. Opdivo works by blocking PD-L1, a protein over-expressed on the surface of cancer cells that activates PD-1.

A second type of immunotherapy that has been approved for melanoma is Amgen’s oncolytic virus therapy, talimogene laherparepvec (T-VEC). An oncolytic virus is a virus that infects and kills cancer cells. The cancer cells are killed through cell lysis—as the virus multiplies inside of the cells, it causes them to burst open. This in turn releases new infectious particles that can target remaining tumor cells. In addition to direct killing of cancer cells via lysis, the presence of an actively replicating virus helps to activate the patient’s immune response to target the area. T-VEC was designed to infect and kill melanoma cells, and is so far the only FDA-approved oncolytic virus.

The Implications of MicroRNA

The microRNA-filled vesicles induce changes in the layer of skin just below the epidermis, where melanoma originates. That lower layer of skin, known as the dermis, contains blood vessels which cancer cells are able to access. The Tel Aviv team is identifying drug candidates that may interfere with this process, preventing the metastasis that makes melanoma so deadly.

The best strategy for melanoma remains prevention and proactive monitoring—limiting sun exposure and monitoring the skin for any unusual growths or changes in moles. Increased understanding of the molecular pathways that contribute to melanoma’s development and spread will provide additional tools to fight those cases of metastatic melanoma that inevitably will continue to arise.