The Plight & Promise of p53

What if scientists could identify a mutated gene that accounts for more than half of all cancerous tumors? This gene would become a holy grail of cancer research.

This gene exists, and it is called p53.

The name p53 refers to its molecular mass. It is sometimes nicknamed  “Guardian of the Genome” because p53 protects cells from damaging mutations. Mutations in p53 are often associated with various cancers for this very reason: if the gene is not doing its job correctly, the entire genome is more likely to incur mutations which may affect its ability to regulate cell growth and division, potentially leading to cancer.

Much like Sir Lancelot’s answer to the Bridgekeeper’s question, “What is your quest?”, let’s cross the bridge “to seek the holy grail.”

Guardian of the Genome

p53’s purpose is to trigger cell death—apoptosis—in response to excessive DNA damage. To perform this function, p53 has to bind to DNA in a very specific manner: 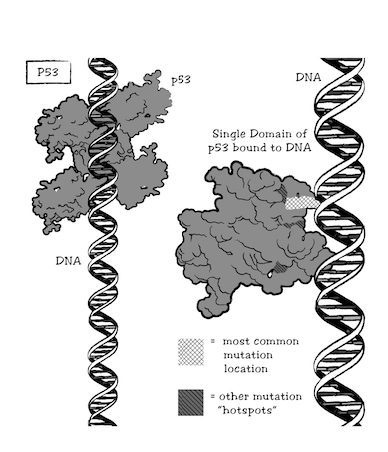 On the left is the structure of p53 bound to DNA’s double helix. Four domains of the p53 protein bind to DNA in a cooperative manner. On the right is an example of one of the p53 domains bound to DNA shown in light grey. The DNA binding surface of the p53 molecule neatly fits into the grooves of the DNA helix.

Most of the mutations that occur in cancer—called mutation “hotspots”—happen in the DNA binding domains close to the DNA binding surface. These mutations destroy p53’s ability to interact with DNA. If p53 is no longer able to bind DNA, it can’t trigger cell death in damaged cells. By studying p53 structural abnormalities, scientists are learning how to develop new drugs that compensate for the aberrant protein structures.

A peptide is simply a short (fifty or fewer) sequence of amino acids. Peptides are often better able to target specific protein structures than small molecule drugs because their shape can mimic naturally occurring protein-protein interactions.

Although many p53-associated cancers are caused by mutations to the p53 gene itself, about half are the result of p53 inactivation caused by the tight binding of a second protein, MDM2. Drugs that inhibit or prevent this MDM2 interaction could potentially result in restoring full activity to p53, enabling it to carry out its cell-protecting mission. Aileron Therapeutics (Cambridge, MA) is working to prevent MDM2 from closely binding to p53 in their new class of therapeutics—“stapled peptides.”

Aileron’s stapled peptides have been chemically modified to be more stable in the patient’s body, and to enter cells more easily. Their lead drug candidate, ALRN-6924, binds MDM2 and disrupts its interaction with p53, freeing p53 up to do its job. ALRN-6924 is in Phase I clinical studies.

ADRx (Thousand Oaks, CA) is a biotech better known for focusing on Alzheimer’s disease (AD) rather than cancer. However, company researchers view one type of p53 mutation similarly to the amyloid-beta plaques linked to AD. This particular misshapen p53 forms clumps reminiscent of amyloid-beta plaques found in AD, rendering the protein ineffective. ADRx has a peptide inhibitor of this interaction in preclinical development.

The drug has completed Phase I safety testing in humans and is preparing to enter Phase II efficacy studies for ovarian cancers. It is being tested in patients who have shown resistance to platinum-based chemotherapy agents such as cisplatin and doxorubin, two drugs that are normally effective in ovarian cancer. These drugs work by promoting additional damage to cancer cell DNA, in hopes of triggering apoptosis. However, in patients with defective p53, apoptosis does not get triggered. Preliminary clinical data suggests that APR0-246 helps to overcome resistance to cislatin and doxirubin. APR-246 is the first compound in clinical development that reactivates mutant p53 inside of cancer cells.

Elephants very rarely get cancer. One would expect them to get the disease more often than smaller animals due to the vast amount of cells in their bodies and the fact that they live almost as long as humans. Researchers at the University of Utah have pinpointed the likely reason for their longevity: extra copies of the p53 gene. Humans have two copies while elephants have 40! By studying elephants and other cancer-resistant animals such as the naked mole rat, scientists may find additional protective proteins that could inspire human therapeutics.