Interestingly enough, having psoriasis is associated with an increased risk of developing asthma according to a study in the British Journal of Dermatology. While these two conditions have different clinical manifestations—constricted airways in asthma vs. red, scaly, itchy skin lesions in psoriasis—both are the result of chronic inflammation often triggered by overactive cell signaling pathways inciting the immune response. In this WEEKLY, we’ll take a closer look at the molecular pathways and various medications designed to control these two conditions that can sometimes coexist.

Term Of The Week: Inflammation

Inflammation refers to the accumulation of fluid, plasma, proteins, and white blood cells initiated by a physical injury, infection, or immune response. When provoked for the right reasons, inflammation is a good thing—it removes damaged cells, irritants, and pathogens. In inflammatory disorders such as psoriasis and asthma, however, the immune response is inappropriately set off against the body’s own healthy cells and tissues—resulting in damage and discomfort.

Chronic inflammation is often caused by disorders in cell signaling, the system of communication governing basic cellular activities and coordinating cellular actions. Cell signaling is typically initiated by a signaling molecule binding to a receptor protein on the surface of a cell. This triggers a cascade of events inside the cell, ultimately resulting in a specific cellular response such as cell growth and division, tissue maintenance and repair, or immune cell activation.

The immune system makes a type of signaling molecule called a cytokine that modulates its activation response. Inflammatory cytokines activate the immune response; anti-inflammatory cytokines turn that response down. If a person’s body is producing too many cytokines that jump start too many immune cells, the immune cells themselves may also become overactive. The challenge for drug discovery is figuring out where to intervene to calm an overactive immune response—the nuances of biological processes at the cellular level are hardly black and white. Cell signaling pathways are all shades of grey, highly complex with many intermediate steps.

Immunoglobulin (Ig) is another term for antibody. Although all antibodies have a similar structure, there are five distinct classes of Ig proteins. Subtle differences in structure between these classes differentiate their functions and localization within the body. For example, immunoglobulin E (IgE) proteins bind to allergens and trigger histamine release. This is why inhibiting IgE may be useful for severe allergies or allergy-induced asthma.

Inhaled small molecule drugs have been the mainstay for asthma sufferers for quite some time. Beta-adrenergic receptor activators relax the smooth muscle tissue in the lung, widening the airway and leading to easier breathing. Corticosteroids act as a general anti-inflammatory agent by decreasing the activation of eosinophils, a type of white blood cell playing a major role in driving asthma-associated inflammation.

Newly approved Cinqair specifically targets eosinophilic inflammation and is used on top of standard medications to tame severe asthma. Cinqair is a monoclonal antibody (mAb) that binds interleukin 5, the cytokine mentioned above that activates eosinophils. When interleukin 5 is bound by Cinqair, it is no longer available to activate eosinophils, thereby reducing their overall numbers in the body and lessening the rate of serious asthma attacks.

There is only one other mAb currently on the market, Genentech’s (South San Francisco, CA) Xolair for treating allergy-induced asthma. Xolair works by inhibiting immunoglobulin E, the protein discussed above that promotes allergic reactions. 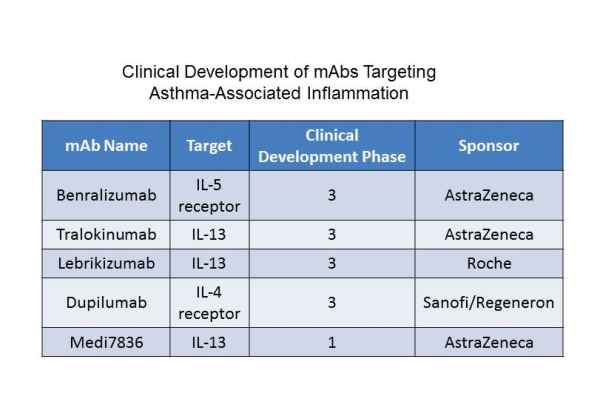 The flaky patches seen in psoriasis are skin cells simply developing too fast. Even though psoriasis is seen on the skin, it is thought to be triggered by overactive cell signaling spurring the immune system to cause systemic inflammation.

The newly approved mAb Taltz works by a mechanism similar to Cinqair. Taltz binds and inhibits interleukin 17, which activates the inflammatory pathways thought to drive psoriasis. With the cytokines blocked, the internal inflammation is lessened, and the skin cells regenerate at a slower rate.

There are already a number of approved mAbs for the treatment of psoriasis, all inhibitors of different cytokines. Janssen Pharmaceuticals’ (Raritan, NJ) Remade and AbbVie’s (North Chicago, IL) Humira both work by impeding the inflammatory cytokine TNF-alpha. Novartis’ (Basel, Switzerland) Cosentyx hinders interleukin 17, while Janssen’s Centecor targets both interleukin 12 and interleukin 23.