Unwiring The Biology Of Fibrosis 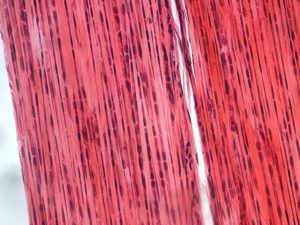 Fibrotic diseases — organ and tissue disorders that occur as a result of the buildup of excessive scar tissue — are sounding the alarm in the biotech sector. A silent epidemic creeping up on the Western world involves non-alcoholic steatohepatitis (NASH), or liver fibrosis associated with obesity and type 2 diabetes. Left untreated, NASH can lead to liver failure. Currently, NASH population estimates run in the tens of millions of people in the U.S., and the numbers are expected to grow along with the incidence of obesity and type 2 diabetes. In the same vein, idiopathic pulmonary fibrosis (IPF) is another type of fibrotic disease affecting approximately 200,000 a people per year in the U.S. The severity of IPF manifests itself as progressive breathlessness leading to respiratory failure, resulting in 40,000 deaths per year.

In this WEEKLY, we will delve more deeply into the roots of fibrosis and break down some of the latest treatment innovations in the clinic.

Term Of The Week: Fibrosis

Connective tissue forms a wiry network which provides the support and structure to cells making up an organ or tissue. It consists of cells such as fat cells or a special cell type called fibroblasts which are suspended in a gel-like matrix made up of proteins. The key protein component of this matrix is collagen, a protein that takes the form of elongated, fine fibers, providing flexible support to the surrounding cells.

Fibrosis comes into the picture when the threadlike connective tissue becomes excessive. This can be triggered by injury and the resulting inflammation. In an attempt to repair damaged tissue, activated immune cells release factors that stimulate fibroblasts to secrete extra collagen and other proteins. This process is normally very carefully controlled, but repeated injury or persistent inflammation can dysregulate it, resulting in scarring, thickening, and loss of function in areas such as the liver, lungs and more.

Several different companies are going after idiopathic pulmonary fibrosis, or fibrosis of the lung whose exact origin is not known. IPF is more common in smokers, and recent studies report that 9/11 first responders suffered from increased rates of IPF, presumably due to breathing in high levels of toxic smoke at the site. This suggests a possible link between IPF and tissue damage caused by smoke inhalation, at least in some cases.


Currently, there are two FDA-approved drugs on the market for IPF:

Pliant Therapeutics (Redwood City, CA) is developing a small molecule inhibitor of protein receptors known as integrins. Integrins play a key role in activating the collagen-producing fibroblast cells. By inhibiting a subset of these integrins present on the surface of the lung, Pliant hopes to prevent the growth of fibrotic tissue within the lung, since scar tissue formation is associated with excess collagen production. Initial clinical trials for IPF are slated in 2017, with plans for subsequent trials in liver (NASH)  and kidney fibrosis.

Biogen (Cambridge, MA) has a monoclonal antibody therapeutic, STX-100, in Phase II clinical studies for IPF. The drug works by inhibiting the inflammatory signaling molecule TGF-beta, which is a key driver of fibrosis.

There are no drugs approved specifically for the treatment of NASH in the current market. Since the scar tissue present in NASH is caused by inflammation of the liver associated with the excessive accumulation of liver fat, many of the treatments in development are focused on managing lipid metabolism, glucose regulation, and inflammation.

Intercept Pharmaceuticals (San Diego, CA) has a promising drug in Phase III clinical trials for NASH. The small molecule drug, obeticholic acid, works by binding to a so-called nuclear receptor – a receptor protein that is present inside of cells rather than on their surface. When this internal receptor is activated, it moves into the cell’s nucleus, where it binds DNA at a specific location, activating the expression of particular genes. Obeticholic acid binds to and activates the nuclear receptor FXR. FXR then modulates the expression of a variety of genes involved in lipid metabolism and glucose homeostasis. Obeticholic acid has been granted breakthrough therapy status by the FDA.

Another recent acquisition in the NASH field is Allergan’s (Parsippany-Troy Hills, NJ) purchase of Tobira’s (South San Francisco, CA) cenicriviroc, a small molecule inhibitor of receptors present on the surface of macrophages, a type of white blood cell important in the inflammatory response. When these receptors are triggered, the macrophages become fully activated and promote the inflammatory processes that contribute to NASH. Cenicriviroc is in Phase I clinical development.

With increasing awareness and attention on fibrotic disease, we can expect to see significant progress in this arena within the next few years.