The ABCs Of mRNA Vaccines 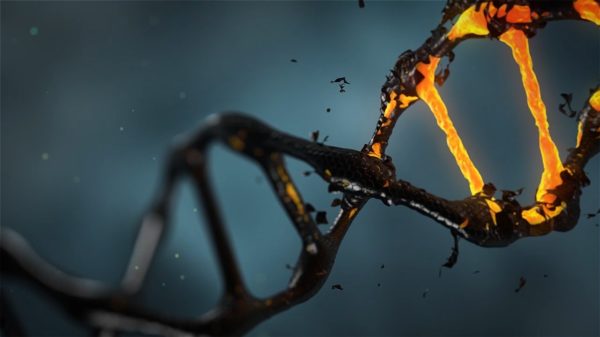 News of positive data from Moderna’s (Cambridge, MA) Phase I trial of a COVID-19 vaccine has dominated this week’s headlines. Their vaccine is an mRNA-based vaccine—an entirely new approach to not only vaccines but also to therapeutics.  mRNA-based drugs and vacines belong to the broader category of nucleic acid-based drugs. These drugs are rising in prominence due to their potential to specifically target a wide range of diseases, including various types of cancer, autoimmune, and infectious diseases. Improvements in delivery methods have increased the efficacy of nucleic acid-based therapies.

In this WEEKLY, we’ll dig up the different types of nucleic acids and unearth mRNA-based therapeutics in development.

Term of the Week: Nucleic Acid

Nucleic acids are long chains of repeating units of nucleotides. Nucleotides are made up of a phosphate group, a sugar group, and a base. 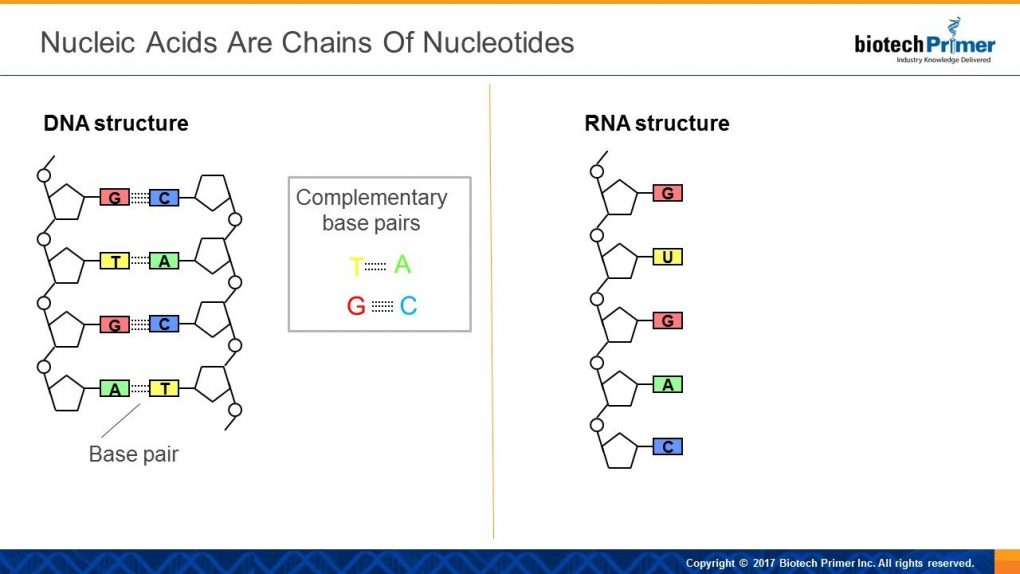 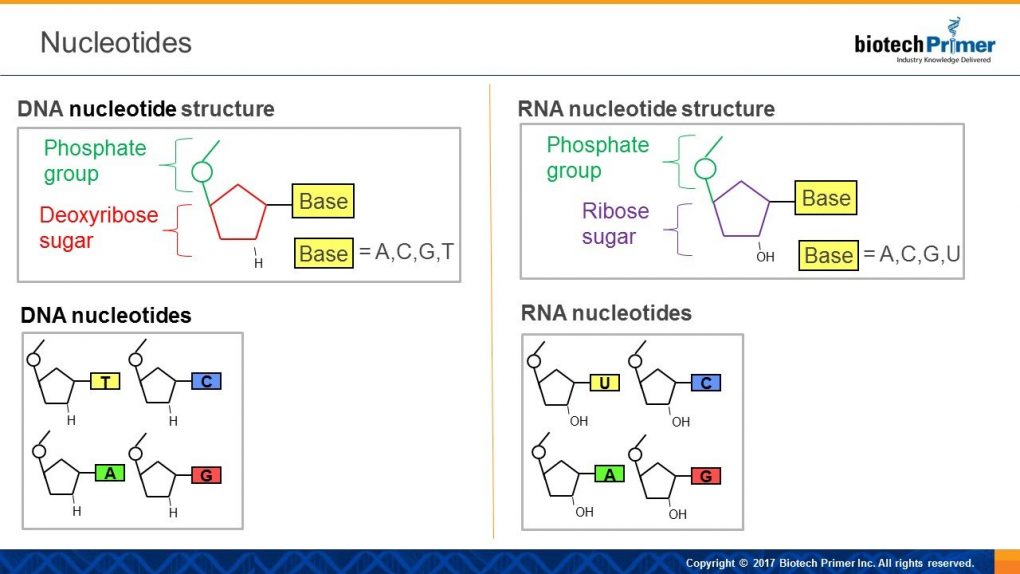 You probably recognize DNA as the molecule of heredity, and may recall that it provides cells with the instructions for making proteins. Enter messenger RNA (mRNA) — the literal messenger that relays the DNA instruction to the ribosome where the protein-making process takes place. 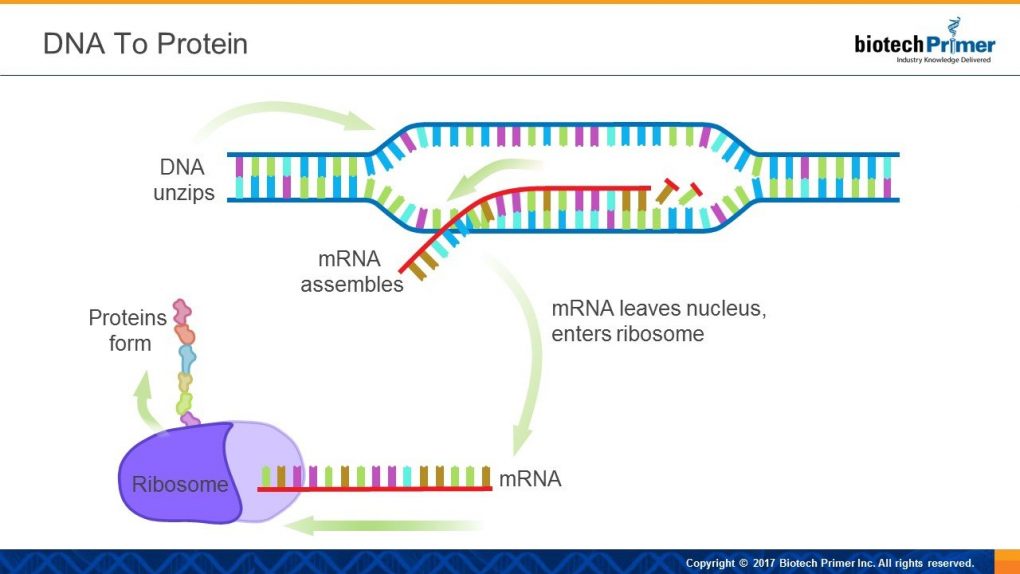 So, why all this talk about mRNA? Well, protein therapeutics — injectable, protein-based drugs such as monoclonal antibodie — have revolutionized the treatment of a range of diseases, from diabetes to cancer to autoimmune disorders. However, they are time consuming and expensive to produce. Cells must be engineered to develop the desired protein, then grown in large (thousands of liters) tanks. Finally, the therapeutic protein must be painstakingly purified away from other proteins and cellular debris in the cell.

What if we could eliminate the huge biomanufacturing tanks and just have the patient make the therapeutic protein using their own cells? That is the idea behind mRNA therapeutics — figure out a way to provide the information contained in mRNA directly to the patient’s ribosomes and let the patient’s cells do the work. Not only would this be more efficient, it would also enable therapeutic proteins to be introduced directly inside cells or embed into the cell membrane. Recall that protein therapeutics injected into the bloodstream are too large to enter cells and are limited to interacting with proteins on the surface of cells or in the blood. (Article continues below)

Learn more about our live and online courses!

Like much in biotech, the concept of mRNA-based therapeutics is elegant in theory, yet rough in reality.

Bringing mRNA drugs to market involves designing chemically modified mRNA that is more stable (resistant to nucleases) and less visible to immune cells than unmodified mRNA. These modified mRNA molecules are called “nucleotide analogs” because they are similar but different from naturally occurring nucleotides.

In addition to the much-vaunted COVID-19 vaccine, Moderna has a number of other mRNA-based products in clinical development. Four of these are infectious disease vaccine candidates in Phase I trials for Zika, respiratory syncytial virus, and influenza, and parainfluenza virus, as well as a cytomegalovirus vaccine in Phase II development. A mRNA-based vaccine uses lipid nanoparticles to deliver the instructions for making a particular viral protein to a cell. The cell then makes the viral protein and displays segments of it on its surface, activating an immune response to fight infection. Moderna also has two therapeutic cancer vaccines in Phase I clinical development for pancreatic cancer, ovarian cancer, and lymphoma, and another in Phase II development for melanoma. Therapeutic vaccines train the patient’s immune system to recognize a specific cancer associated protein, priming immune cells to attack the tumor that bears those proteins.

Moderna is also developing mRNA drugs that code for therapeutic proteins. These include an mRNA that codes for the protein known as vascular endothelial growth factor, or VEGF, currently in Phase II development. This protein promotes the growth of blood vessels, and may help to improve blood supply in cardiac tissue after a heart attack, or in diabetic wound healing.

CureVac (Tubingen, Germany) is focused on mRNA vaccines as well, with therapeutic vaccines for melanoma, head and neck cancer, and non-small cell lung cancer in Phase I. CureVac also has a mRNA-based rabies vaccine in Phase I clinical studies, and is preparing to enter Phase I trials of a COVID-19 vaccine.

Other companies to watch in this space include:

mRNA drugs and vaccines show much promise and we will continue to closely follow this area for new developments. Here’s hoping an mRNA vaccine just might be the answer for stopping COVID-19 in its tracks.