Greetings from BIO 2017! It’s been a busy week here at the BIO International Convention here in San Diego, CA. At our convention booth, this year’s giveaway was our book written especially for non-scientists: The Biotech Primer: An insider’s guide to the biotech and pharma industry. If you weren’t at the convention to stop by and get a copy, please enjoy this excerpt below on cellular communication – a topic fundamental to understanding both normal and diseased cellular processes, and a process that is modulated by many drugs on the market today.

In multicellular organisms, cells must communicate with each other. Since cells don’t have mouths, ears, or access to email, they must rely on chemical messengers. A chemical message – for example, a hormone – is released by one cell, and received by a second cell – the target cell. The target cell receives the message through proteins inserted into its membrane known as receptors – proteins that control the passage of molecules and the flow of information across the membrane. When the signaling protein binds its receptor, the receptor changes shape and transduces (converts from one form to another) the chemical message across the membrane to the cell interior. This process of cellular communication is known as signal transduction. The most common end result of signal transduction, and a key step in cell decision making, is the switching on, or off, of protein production – more commonly called gene expression. 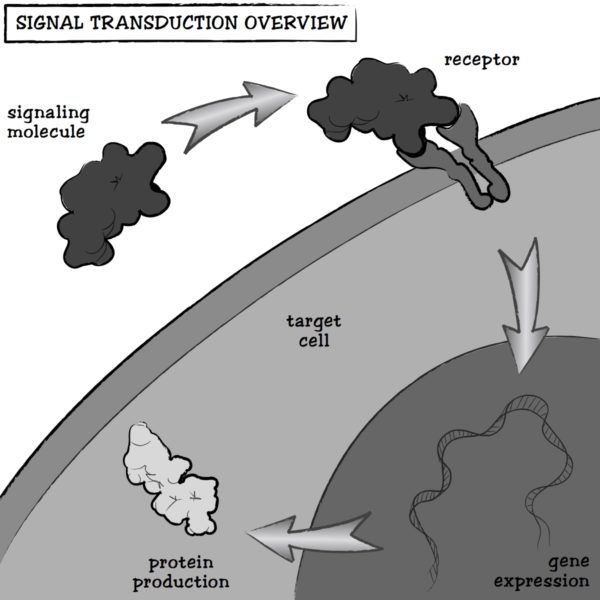 Another class of membrane proteins that aid in cellular communication is channel proteins. These proteins act as molecular gates that allow the passage of small molecules and ions, for example, glucose and sodium, across the membrane in response to a stimulus, such as an electrical current in the case of ions or insulin signaling in the case of glucose. In neurons, ion transport between cells serves as a principle means of signal transduction. The influx of calcium ions (Ca++) into a neuron results in the release of neurotransmitters – chemical messengers specific to the nervous system. Different types of neurotransmitters regulate a variety of brain functions, including muscular activity, memory and learning, and mood regulation. 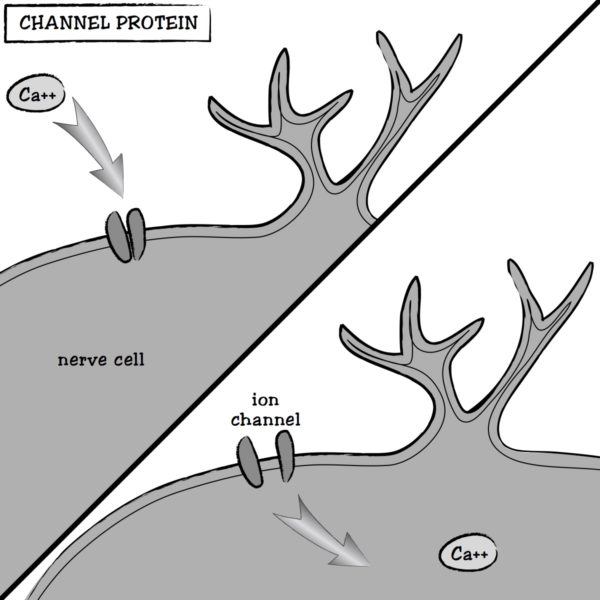 The regulation of blood sugar levels by the protein hormone insulin is an example of cellular communication. After you eat, beta cells in your pancreas sense increased blood glucose and respond by releasing insulin into the bloodstream. Insulin molecules attach to specific insulin receptors on muscle cells and, in doing so, deliver a signal to the inside of the muscle cell to send glucose channels to the membrane, resulting in glucose uptake. In this way blood glucose levels are kept constant. 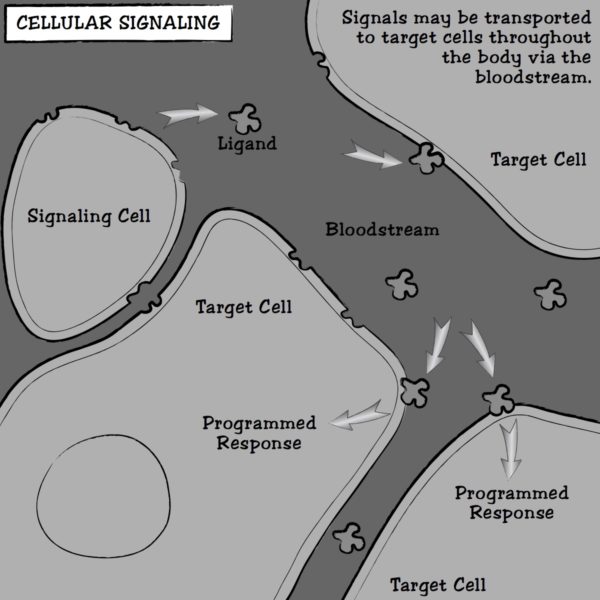 Alternatively, the signal and target may be in close proximity and the signal can be transported by diffusion through the intracellular space. After receiving a signal, the target cell responds in a manner that is determined by the nature of the signal received. 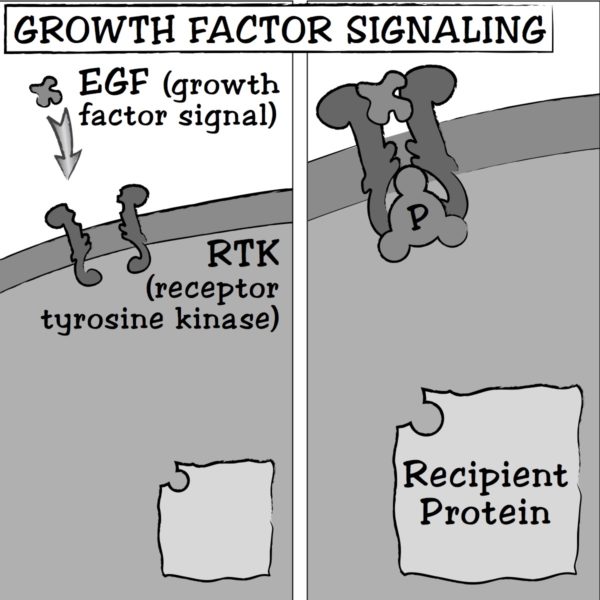 After receiving the initial growth factor signal, the enzymatic activity of the internal portion of the growth factor receptor is activated. The particular type of activity switched on is protein kinase activity – or the ability to transfer a phosphate group from one molecule to another. These types of receptors are sometimes referred to as receptor tyrosine kinases (RTKs), because they selectively transfer phosphate groups to the amino acid tyrosine on the recipient protein. This transfer, in turn, causes a slight shape change in the protein which received the phosphate group, typically leading to the activation of that protein’s own kinase activity. This newly activated protein kinase then goes on to activate yet another kinase protein, and so on, in what is referred to as a signal transduction cascade. The last element in this cascade to be phosphorylated is typically a protein called a transcription factor. Once phosphorylated, the transcription factor enters the nucleus, where it binds to the DNA at a particular location, activating expression of a specific gene. 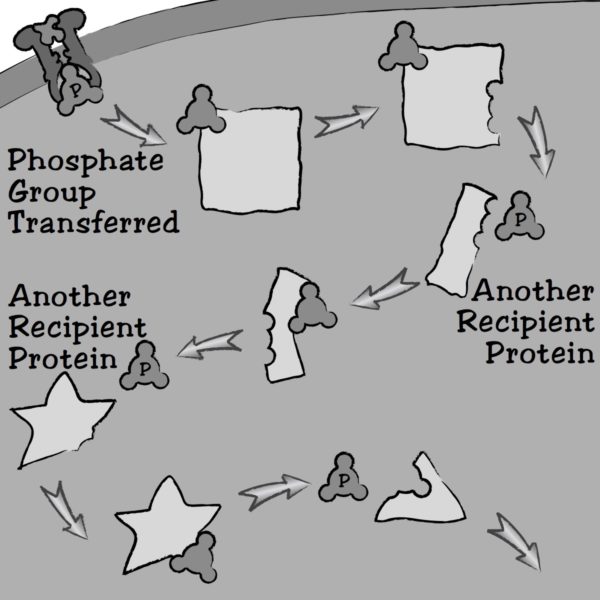 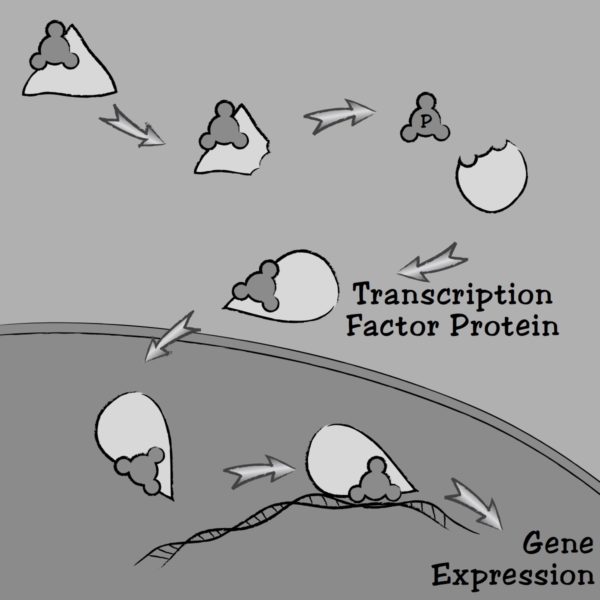 Defects in the growth factor signaling process are associated with different types of cancer. A major challenge in oncology lies in understanding the complex signaling pathways that trigger cell division and determining what has gone wrong in each type of cancer. Once these signaling pathways are understood, it is possible to develop targeted therapies for the particular cancer.