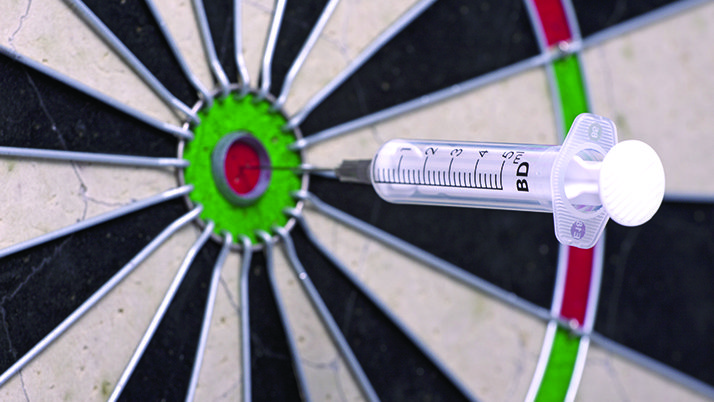 Last week, the WEEKLY explored how researchers identify drug targets—the molecules in our bodies that make good candidates for therapeutic action. It’s a painstaking but strategic process, and only the first step toward Huey’s mythical remedy.

Therapeutic choice hinges on a disease’s origins. If an illness originates outside the cell, a biologic is a logical choice since it is too big to enter the cell. Though more expensive to produce, biologics typically cause fewer adverse reactions than their smaller counterparts.

Small molecule drugs attack disease from within the cell. The downside? Their small size means they have the potential to also activate many off-target molecules. This collateral damage increases the chance of adverse reactions.

ASSAY DEVELOPMENT: GLOW AND NO GLOW

To find the best drug candidate, scientists need to design easy-to-perform, large-scale, fast, and accurate assays. Think automation. Think high throughput screening. Scientists often work with tests that produce a fluorescent signal or color change because color is easy to measure, relatively inexpensive to design, and safe. Depending on the assay, a color change may or may not indicate a drug candidate works.

GLOW
Imagine “Enzyme Z” causes “Disease Z.” Its cure lies in shutting down, inhibiting “Enzyme Z.” Enzymes feature active sites, a kind of pocket that binds various small molecules. Researchers manipulate these small molecule inhibitors to light up by emitting a fluorescent signal if they bind (shut down) the enzyme. 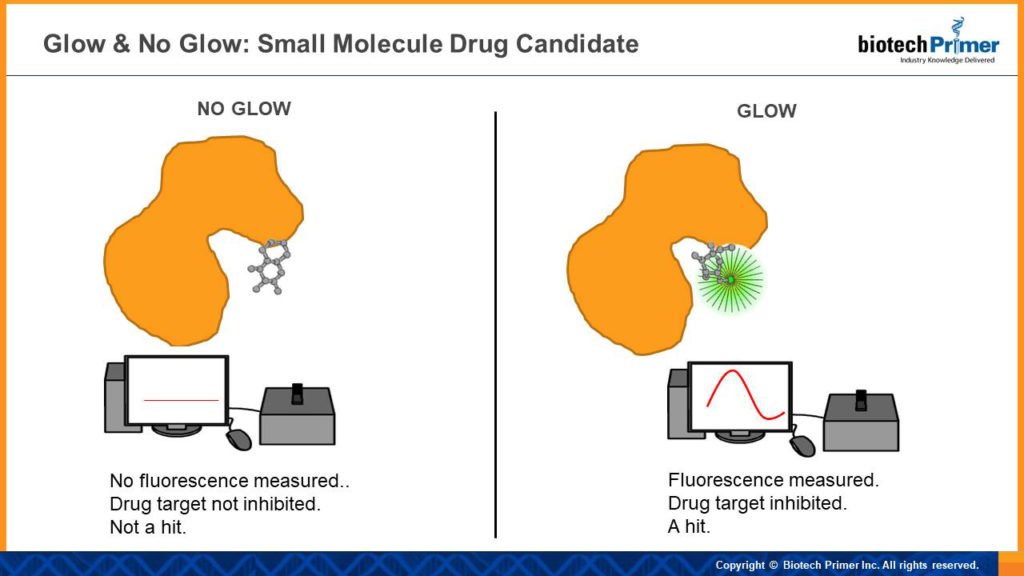 NO GLOW
Scientists use similar colorimetric tests for large molecule drugs such as antibodies. Let’s say that activated “Receptor X” turns on a particular gene that, in turn, causes cancer. Scientists can engineer cells so when Receptor X is activated, the cell produces a green fluorescence and when it is not activated no green appears. Researchers are hoping for “no glow” or in lab-speak, a “blank.” Blanks are the winners that go on to the next stage of drug development. 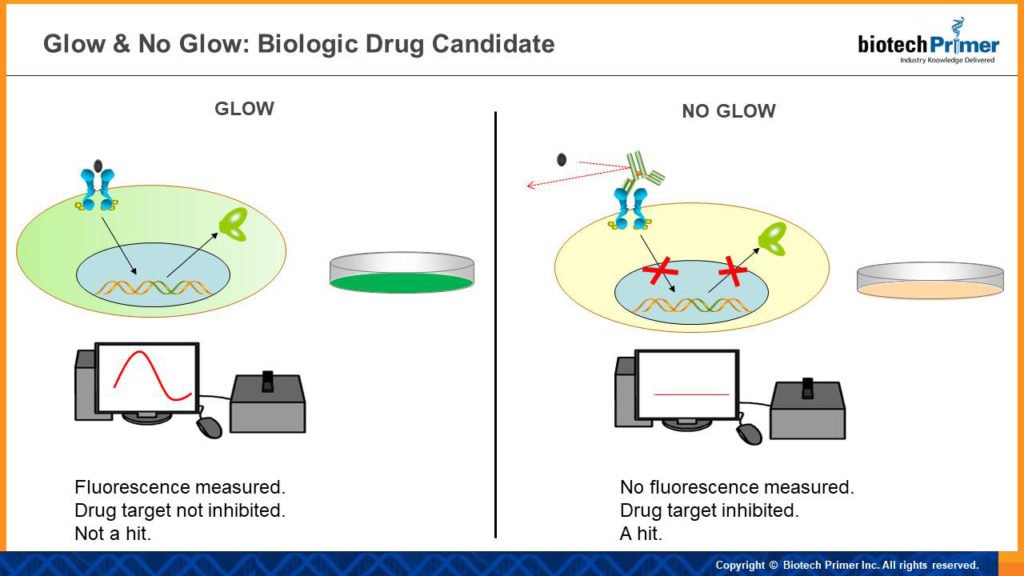 If a potential lead is supposed to inhibit an enzyme it should act on that particular enzyme. A lead with effects that are too general may result in a drug with dangerous adverse reactions. Therefore, researchers aim to develop a drug that inhibits the target at a concentration low enough to avoid interfering with related enzymes. This approach provides a therapeutic window within which the drug is effective and safe. (Article continues below)

Biopharma companies typically put lead compounds through several rounds of optimization before they can become drug candidates for preclinical testing. Lead optimization is the process by which a drug candidate is designed via iterative rounds of synthesis. For small molecule drugs, this tweaking may include creating derivatives of the lead. Often made using computer-aided design (CAD), derivatives can help ensure the lead fits well with its target. Researchers then test each for improved potency, fewer side effects, solubility (making sure that the drug stays liquid and won’t form clumps) and shelf life, otherwise known as stability.

Of course, optimization for large molecule drugs differs because biologics are genetically encoded. Researchers have developed techniques to create mutations in proteins at specific locations. Again, the goal is to see if changes produce a better drug—maybe even one up to Huey Lewis’s rigorous standards. If so, researchers have at long last an official drug candidate, one ready for the rigors of preclinical testing in animals.